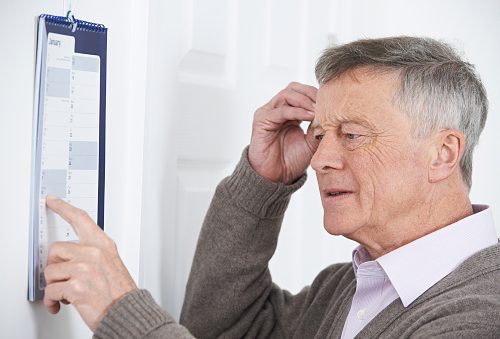 Dementia is a term used to describe significant cognitive impairment. These impairments are often seen in two or more critical brain functions such as memory, language, judgment, and reasoning. Deficiencies in these aspects of cognitive ability can significantly affect a person’s daily functioning, making them require constant aid.

Statistics of dementia in men

Researchers and scientist are still unclear why this gender difference exists, but theorize that the longer life expectancies of women may play a factor. Other possible reasons may be hormonal differences between men and women, genetic differences (the effect of estrogen on APOE-e4 for Alzheimer’s disease), and even historical differences in education, as in the past, educated women were a rarity and it is known that low education is a risk factor for the development of Alzheimer’s.

10 early signs of dementia in men

Dementia is a collection of symptoms, and there are many overlapping features between the different types. Other diseases and disorders can contribute to dementia, which may affect thought processes, communication ability, focus, and memory capacity of those affected. It is important to not assume your loved one has dementia just because they are facing memory problems. The diagnosis can be complicated and requires the assessment of a doctor or medical professional. The following are some of the more common signs of early dementia in men:

Recent memory loss: Forgetting recent conversations or events is often the first sign. Memories are often not affected and may throw off family members, making them think that memory is okay. Often those affected by dementia will not be able to remember what they eat for breakfast.

Difficulty performing familiar tasks: A very reliable warning sign, according to many medical experts. Dementia patients often lose the ability to cook food they once did flawlessly or get lost on their way home in a neighborhood they’ve lived in their whole lives.

Language problems: Struggling to communicate thoughts is often an early sign of dementia. They have difficulty explaining things or have trouble finding the right words to express themselves. They may also substitute the wrong word either knowingly or not.

Apathy: Seen as a lack of interest or concern. This may present itself as a loss of interest in previously enjoyed hobbies or the disinterest in going out to do activities.

Disorientation of time and place: Forgetting where you are when out of the house. This may happen at a shopping mall or grocery store that they have been to multiple times in the past, but have forgotten the layout.

Difficulty completing tasks: Especially tasks that came easily to them, such as balancing the checkbook or playing games with many rules. Dementia patients may also struggle to learn how to do new things or routines.

Confusion: This can have many presentations and can be seen in the early stages of dementia. Confusion can manifest as difficulty remembering faces, finding the right words, or interacting with people socially.
Deteriorated judgment: Dementia affects both memory and concentration, which in turn can affect judgment. Dementia sufferers may be easily manipulated by sales people and family members.

Mood and behavior changes: Emotional instability may be an early sign of dementia manifested as mood swings. Going from calm to angry for no apparent reason can be a sign. Behavioral changes may also shift in one direction, usually toward becoming more withdrawn or depressive, but being overly happy can also be seen in dementia patients.

Being repetitive: Due to the common feature of memory loss in dementia patients, a person may repeatedly ask the same question after it has been answered, repeat already completed daily tasks, or may collect items obsessively.

Warning signs of dementia in men

Differences in signs of dementia in men and women

While it is true that the majority of dementia symptoms and signs are seen in both sexes, according to research, some differences can be appreciated between the two. They involve the rate and degree to which certain symptoms develop. The following are such symptoms:

Verbal skills: Men were seen to retain verbal fluency longer than women. This is the ability to correctly perform naming tasks, and the ability to successfully perform delayed recall of words.

Subjective memory complaints: Women were seen to experience memory impairment earlier in the course of dementia than men.

Rate of symptom progression: A study found that once the initial symptoms of dementia appear in men and women, they tend to progress at a faster rate in women than men. The reasoning for this correlation is not well understood but is suspected to be genetic or environmental in origin.

Forgetfulness may be a normal part of aging and is not always caused by a neurodegenerative brain disease such as Alzheimer’s. If you happen to suspect someone you know is suffering from early onset dementia symptoms and doesn’t show any signs of improving, it may be a good idea to have them speak to a doctor to get neurological testing.

Often, a neurologist is required to assess dementia through a physical exam and ordering various tests to determine mental health. There are many things a neurologist can do in the office that can be a good indicator to whether the patient truly is suffering from dementia or not.

Typically, dementia affects persons of advanced age, usually over the age of 65, but it is possible for individuals to be affected as early as their 30s, 40s, or 50s. Earlier age of onset may have additional factors playing a role in the accelerated and early presentation of those individuals, such as genetics. While dementia, in general, may be difficult to treat, early recognition and diagnosis may aid in slowing the progression of the disease, allowing the ability to take the steps to prevent further mental deterioration.

Dementia in elderly: Irreversible and reversible causes of dementia