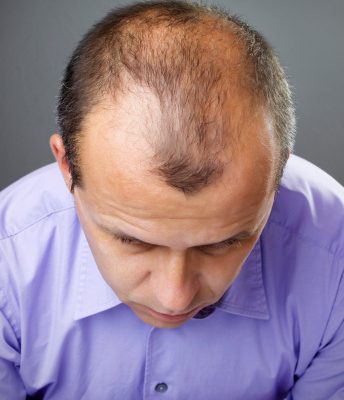 Over 30 million men in the United States experience hair loss, and approximately 20 million women have this problem, too. As hair loss can make many people feel uncomfortable or experience a blow to their self esteem, extensive research into possible treatments and causes continues to be conducted, to help us hold on to this precious aesthetic commodity for as long as we can.

However, the most recent hair loss theory may leave you hanging your head (literally) in frustration, or desperately seeking a one-way ticket to the next inter-stellar space craft leaving the station. The theory suggests that the Earth’s gravity may be what’s making hair loss an ultimate and unavoidable inevitability after all.

Hair Loss As You Age

Losing hair is something that normally happens on a gradual basis. The average head has about 100,000 individual strands of hair, but both men and women can lose hair thickness as they age. Pattern baldness is the most common type of hair loss in men. The pattern usually starts at the hairline and slowly moves backwards to form an “M” shape. This is where the phrase “receding hairline” comes from. In many cases, the hair becomes thinner and eventually develops a “U” shape pattern around the head.

RELATED READING: 7 Surprising Reasons You May Be Losing Hair, and What To Do About It

Doctor Emin Tuncay Ustuner is a plastic surgeon in Ankara, Turkey. He believes that gravity pulls down the skin on the scalp, which causes hair loss in men. His theory is that young men have a good amount of fat tissue under their skin that is able to stay well hydrated, taking the pressure off of hair follicles. As men age, however, the skin and fat underneath becomes thinner and less hydrated, putting more pressure on the hair follicles. As the cushioning of fat decreases, the idea is that the hair follicle has to work harder against the pressure; it requires more hormones for normal growth.

Doctors say the male sex hormone testosterone will respond to this reaction by automatically building up in the scalp. Doctor Ustuner argues that the problem is that it is not enough to fight the increased pressure, so over time, the hair follicle gets smaller and hair loss begins. Ustuner points out that if the pressure created by the weight of the scalp is the cause of balding, then baldness should happen at the top of the head. This is what takes place with male pattern baldness. The gravity theory also states that the ears help resist the effects of gravity on the scalp, which is why we often see less hair loss on the sides of the head.

Critics of the Gravity Theory for Hair Loss

Some skeptics call the theory “novel” and overly simplified.  Doctor Ustuner has responded by saying that he understands how “simplifying” an emotional issue like baldness could evoke such a critical reaction. He also admits that every situation is different, and that he believes that hair loss patterns are also affected by differences in the shape of a person’s head, reflecting “variations in scalp pressure”.

Supporters of the gravity theory have pointed to hair growth in other parts of the male body that, due to a lack of this gravity effect, do not end up suffering from the same kinds of thinning as the scalp does (for example, the underarms). As body parts like the underarms do not have the same gravitational pressure that the skin and follicles of the scalp experience, they are not affected by hair thinning and loss with age.

If you’re concerned about signs of hair thinning, a detailed look at your medical history and an examination of your hair and scalp is normally enough for a doctor to be able to diagnose the cause. Today, there are a number of healthy, effective treatments for hair loss. While some treatments can be very costly and deterring, there are other options available to manage hair loss without harsh side effects and without breaking the bank.