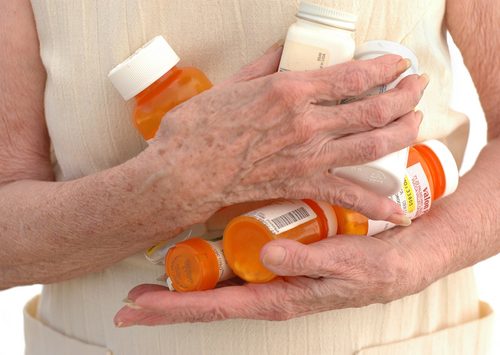 What’s the best fix for a very bad day? A phone call to a friend, or going for a walk in the park? Maybe a nice home-cooked meal…

Better yet – a good stiff drink or a martini, shaken not stirred. If that doesn’t ease the pain, prescription painkillers can help you stay on that even keel.

Not that I’m trying to make light of turning to drugs and alcohol for comfort. There are numerous healthy ways to cope with the unhappy stuff that comes our way, but more and more of us are turning to harmful substances. While you might think we have to worry about teenagers and this kind of behavior, the population that’s at high risk of substance abuse today is seniors.

The secret you need to know about

The abuse of alcohol and prescription drugs among adults 60 and over is one of the fastest growing health problems facing the country. But it’s like an invisible epidemic that we don’t talk about, doctors may not screen for, and patients simply deny.

Another roadblock to giving the issue a voice is the older generation’s disapproval and shame about misuse of substances. That goes hand in hand with a reluctance to get professional help for what’s considered to be a “private matter.” It’s an attitude that needs to change.

Let’s be clear – substance abuse doesn’t start in some back alley in the seedy part of town. It begins in doctors’ offices when you complain about aching joints or back pain. Those complaints are most common in the elderly. In fact, new numbers from a Washington State University poll show that one in five American adults are battling persistent pain.

The fix? Your doctor gets out their Rx pad and sets you up with prescription painkillers that can be dangerous and addictive. Then there are the drugs for your blood pressure and your cholesterol.

We’re a well-medicated bunch. A report in 2014 from the Center for Disease Control and Prevention (CDC) said that half of American adults take prescription pills, with only 10 percent of people over 65 not taking any prescription medication.

In other telling news, the rate of illicit drug abuse in adults over 50 more than doubled between 2002 and 2013.

But why the need for substance abuse? Aren’t the Golden Years supposed to be just that –Golden? The kids have long left the nest, and you’re finished with the workforce grind and office politics, freeing up your time for hobbies, friends and travel.

There has been a lot of study on retirement, and how people cope with the shift from a work routine to leisure time, the loss of structure and, often, a sense of purpose. For many, it can be a time of loss and loneliness.

New research from Tel Aviv University, published in the Journal of Work, Aging and Retirement, follows a 10-year study funded by the National Institutes of Health (NIH). The study was run as an annual phone survey of 1,200 service, construction and manufacturing workers aged 52 to 75.

The problem, they found, is much more than a lack of work.

It’s a lack of skills that are required to cope with the sudden vacuum produced by retirement. Not only retirement, but events common to later life have a significant impact, like deteriorating health, and the death of spouses and friends. The circumstances that play out are compounded by feelings of depression, purposelessness, and financial strain – all documented to lead to substance abuse.

How do you cope and carry on?

The researchers found that the conditions surrounding retirement, whether they were pushed into it or not, had a significant impact on alcohol and drug habits. The worst combination was among people who loved their jobs but retired early because they were worried their company was going under.

Even when people plan for retirement, they may face financial and marital problems which can exacerbate alcohol and drug abuse.

Study researchers say awareness about the issue can bring about positive change, and encourage people to get help. Family, friends and caregivers could help to identify behavioral changes that might flag that someone is on a downward path to substance abuse. The sooner a negative behavior is noticed, the better.
They also suggest that social connections are more important than ever. They provide the support you need to get you through difficult times. If you don’t have a strong network of family and friends, now is the time you need to push yourself to reach out to people. Join a class, or a community or retirement group, to connect you to people. Start becoming more social and your health will benefit.

An aging brain is at higher risk

Substance abuse, research shows, can be harder on seniors, putting them at higher risk for deteriorating health.

The 2009 Substance Abuse and Mental Health Services Administration’s (SAMHSA) National Survey on Drug Use and Health revealed a dramatic increase in illicit drug use in older adults, including nonmedical use of prescription drugs among women aged 60 to 64.

Overall, alcohol was the most frequently reported substance of abuse, most often by people aged 50 to 59.

The consequences of unrecognized substance abuse and dependence are serious. Aging brings on changes in the body that make you more susceptible to the negative effects of alcohol and other illicit substances. For one, they can be harder on an aging brain, causing cognitive impairment and frailty. Other issues that can result include liver damage, immune system impairment, and cardiovascular and digestive problems.

Another contributing factor is that health care professionals are not expecting substance abuse in seniors. When elderly patients come to the ER with severe illness, linking the cause to alcohol or drugs is not top of mind. So sickness in seniors is often misdiagnosed and complicated by the patient’s own denial.

It’s a complex problem, to say the least, but one we’ve got to start paying attention to. Physicians need to be on the lookout for substance abuse in seniors and screen patients better. Identification and treatment is important, and research has shown that elderly patients reduce substance use when they’re encouraged by their doctor.

Prescription pills have their place, but like alcohol, they’re toxins in the body. It’s time to wake up and recognize what we may be setting ourselves up for with prescription meds and weigh the pros and cons.

We need to consider alternative, natural remedies for pain, and take more initiative when it comes to preventing blood pressure and cholesterol problems. Doctors, families and patients have to share the responsibility of protecting our health. That’s what it really comes down to.