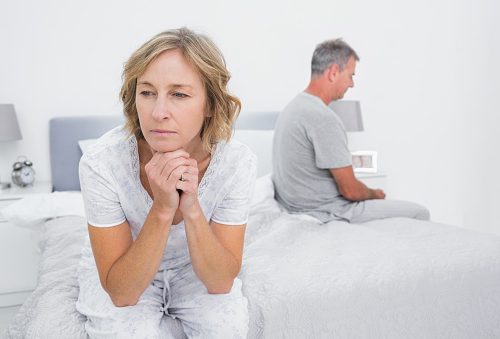 As the saying goes, “don’t go to sleep angry.”

You’ve probably experienced a poor night of sleep and felt irritable and cranky the following day. A new study suggests that this lack of sleep and eagerness to start a feud can contribute to stress-related inflammation.

Stress-related inflammation is associated with a higher risk of cardiovascular disease diabetes, arthritis, and other diseases.

Lead researcher Stephanie Wilson explained, “We know sleep problems are also linked to inflammation and many of the same chronic illnesses. So, we were interested to see how sleep related to inflammation among married couples, and whether one partner’s sleep affected the other’s inflammation.”

The researchers recruited 43 couples who completed two study visits. On each visit, the couples gave a blood sample and provided the researchers with the hours that they slept the previous two nights. Couples were then prompted to resolve a topic that creates conflict within the marriage. After the discussion, additional blood tests were taken.

Wilson added, “We found that people who slept less in the past few nights didn’t wake up with higher inflammation, but they had a greater inflammatory response to the conflict. So that tells us less sleep increased vulnerability to a stressor.”


Arguing before bed is unhealthy

The researchers found that couples who got less than seven hours of sleep over the last two nights were more likely to argue and be hostile. For every hour of sleep lost, inflammatory markers within blood samples increased six percent. This inflammatory response was seen to be much greater among couples who dealt with their disputes in an unhealthy manner.

“Any increase isn’t good, but a protracted increase that isn’t being addressed is where it can become a problem. What’s concerning is both a lack of sleep and marital conflict are common in daily life. About half of our study couples had slept less than the recommended seven hours in recent nights,” Wilson continued.

Janice Kiecolt-Glaser, senior author and director of the Institute for Behavioral Medicine Research added, “Part of the issue in a marriage is that sleep patterns often track together. If one person is restless or has chronic problems, that can impact the other’s sleep. If these problems persist over time, you can get this nasty reverberation within the couple.”

The researchers recommend that couples find healthy ways to resolve conflict along while getting at least eight hours of sleep each night.

Sleep Problems could be Ruining Your Relationship