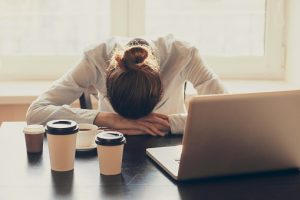 Sleep deprivation has been linked to higher levels of stress and depression. Today, life stress and the general hubbub of modern society can keep us up at night. And for caffeine-fueled North Americans – with smartphones and tablets at their bedsides – sleeping may seem like a waste of time, to the extent that sleep deprivation has become the norm, rather than the exception.

Now that we’re not sleeping as much, what does that mean for our health?

New research conducted by Binghamton University, and published in the journal Cognitive Therapy and Research, has uncovered that the hours we clock in for sleep can make us worriers. The study discovered that people who go to bed fairly late and sleep for shorter periods have more negative thoughts compared to those who keep regular sleeping hours.

Less sleep linked to negative thoughts throughout the day

They asked 100 young adults at Binghamton University to complete a series of questionnaires and two computerized tasks that measured how frequently the students worried or obsessed about something. That was how repetitive negative thinking was assessed.

What’s more, the students were asked whether they were morning or evening types – whether they preferred to keep regular hours or a sleep-wake schedule that skewed toward later in the day. What researchers found was that people who go to bed later and sleep for shorter periods repeatedly experienced bothersome thoughts.


Sleep by the numbers

Over time, the amount of sleep we are getting each night has drastically declined. Most experts recommend that adults get between seven and eight hours of sleep every night. After age 70, sleep quality and duration typically declines because we have less of the sleep-inducing neurons in our aging brains.

According to the Centers for Disease Control and Prevention (CDC), more than 35 percent of American adults report getting less than seven hours of sleep a night, and 38 percent reported falling asleep unintentionally at least once every day. Spread out over a year, this lack of shut-eye is the same as losing more than a month of sleep.

Those who have sleep problems tend to worry incessantly about the future or dwell far too much on the past. Such annoying, intrusive thoughts are often typical of people suffering from post-traumatic stress disorder, obsessive compulsive disorder, social anxiety disorder, generalized anxiety disorder, and major depressive disorder, which causes you to feel incredibly sad, helpless and even without hope.

Today, one in 10 American adults has depression, the CDC estimates. Those who experience it the most are women between the ages of 45 and 65.

Tips to improve your quality of sleep and avoid sleep deprivation

In light of recent findings, making sure that you get enough sleep – at the right time – may be the easiest way to keep a healthy, positive attitude. Remember that the amount of sleep changes with age and consider the simple changes that you can make to improve your own sleeping habits.

Keeping your room dark, cool and noise-free is a good start. Also, make sure you are “powering down” at least 30 to 60 minutes before hitting the pillow – that means no TV-watching in bed! Lastly, don’t use alcohol as a means to get some shut-eye; it only interrupts your sleep phases, causing you to get even less sleep.

If you still find you’re having trouble falling asleep, you may have more serious underlying issues. Speak to your doctor to get to the bottom of things.

Sleep is equally as important as eating. Just as food gives us nutrients, sleep gives us renewed energy and peace of mind.

Sleep deprivation and kidney disease, one increases risk for the other

Sleep deprivation and kidney disease have been found to increase the risk of each other. New research was conducted on women and found that those who slept five hours a night or less had a 65 percent higher risk of developing kidney disease. To complete the study researchers examined the sleep habits of thousands of women. Continue reading…