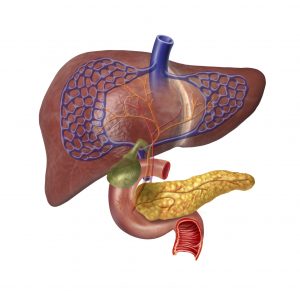 Inflammatory bowel disease (IBD) and ulcerative colitis are associated with liver disease. Liver disease can be quite common in IBD, as researchers believe they share many of the same pathogens.

Anything we consume passes through the liver, in a process somewhat similar to that of a processing plant. The liver helps the body break down things we ingest and removes waste. In IBD patients, the liver can become inflamed as well, and serious liver disease affects up to five percent of IBD patients.

Symptoms of an inflamed liver include fatigue and low energy, feeling full or feeling pain in the upper right side of the abdomen, itching, jaundice, easy bruising, and fluid retention. Some patients, however, may not experience any symptoms, allowing for further damage to occur to the liver.

Blood tests are the most common way to diagnose liver disease, but ultrasound, CT scan, and MRI can be used as well to confirm diagnosis.

There are many liver complications associated with IBD and ulcerative colitis, including:

Hepatitis: There are many causes of liver hepatitis, which refers to general inflammation of the liver. IBD can cause hepatitis, as it is an inflammatory disease itself, and although it commonly affects the gastrointestinal system, it can impact other areas of the body as well. The same medications to treat IBD and ulcerative colitis are used to treat hepatitis in order to reduce inflammation.

Gallstones: Gallstones are commonly seen in Crohn’s disease as the body’s way of dealing with bile. The gallbladder stores bile until it is needed for digestion, but when it becomes hard, it forms stones, which can block the ducts, causing pain, nausea, and vomiting.

Primary sclerosing cholangitis (PSC): This is a form of inflammation in the bile duct system of the liver. Bile ducts help to move bile from the liver to the small intestine. PSC is seen in three percent of IBD patients. When the bile ducts begin to scar due to liver inflammation, the bile cannot get transported from the liver properly. Bile then builds up, and symptoms begin to occur. Unfortunately, there is no treatment for this condition, but stents can be implanted in order to control bile and keep it flowing.

Pancreatitis: This is inflammation of the pancreas, which can be caused by gallstones or the blocking of bile ducts. Pancreatitis can also be a side effect of IBD medications, so it is important that you speak with your doctor if you develop pancreatitis in case you need to switch your medications. Treatment should not be stopped or changed without the approval of your doctor.

Inflammatory bowel disease doesn’t solely affect the gastrointestinal system. Other complications may arise as well, including liver complications. If you begin to experience any of the abovementioned symptoms, speak to your doctor right away to start treatment for your liver before the damage becomes irreversible.

IBD and IBS may share symptoms, but are not the same