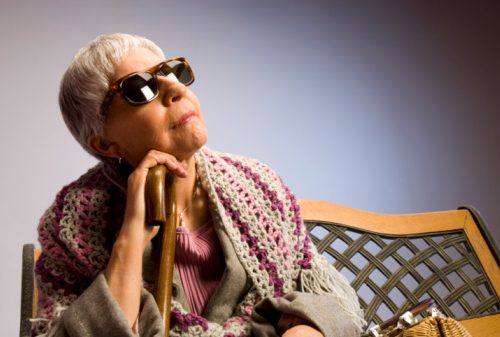 With advancing innovation in medicine, people are living longer and healthier lives. This means that for the first time in human history, the elderly population is the biggest it has ever been. As great as modern medicine can be, it still has its limitations.

As people continue to live well into their golden years, researchers believe that the worlds blind population will increase threefold from about 36 million today to 115 million in 2050.

In modern countries, impaired vision may not seem like a huge problem. We have tons of medical professionals dedicated to treating the eyes and improving vision. However, other parts of the world aren’t so fortunate.

How we determine visual problems

The current criteria for assessing visual acuity is using the Snellen Eye Chart. This is the chart that is seen in most doctors’ offices and has letters at varying sizes on them. Generally, a person’s vision can be determined by the distance they stand and how far down the chart they can actually read.

The people most affected by moderate to severely impaired vision live in Africa and Asia. These countries do not have the same standard of care as most people living in North America. Normal vision is said to be 20/20—that means the test subject sees the same line of letters at 20 feet that a person with normal vision sees at 20 feet.


At the moment, modern medicine is prevailing

Despite this sobering prediction, the prevalence of blind people has actually dropped, decreasing from 0.75 percent in 1990 to 0.48 percent in 2015. The rate of moderate to severe visual impairment declined from 3.83 percent to 2.9 percent over the same time.

“This is almost certainly because of improved health interventions, [such as cataract surgery],” said study co-author Rupert Bourne of the Anglia Ruskin University.

As the population ages, it will inevitably put an increased strain on advancing healthcare, as the body isn’t designed to live forever. Older individuals are simply prone to developing complications with the increase in time.
The most common complications leading to visual abnormality include age-related macular degeneration, glaucoma, cataracts, and diabetic retinopathy. Most of these are essentially exclusive to the elderly population.

“With the number of people with vision impairment accelerating, we must take action to increase our current treatment efforts at global, regional and country levels. Investing in these treatments has previously reaped considerable benefits, including improved quality of life, and economic benefits as people remain in work,” said Bourne.

Related: 7 common habits that are harming your vision

This simple fruit can improve your vision

How to know if you are at risk of vision loss