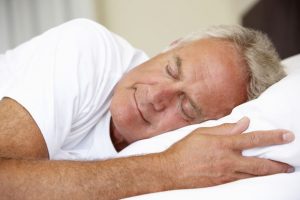 New research has found an association between seniors who suddenly begin sleeping longer hours and an increased risk of dementia. Older adults who began sleeping more than nine hours a night saw their risk of developing dementia later in life more than double, while those who found they suddenly needed more sleep and did not have a high school diploma found their risk increase six-fold. This suggests that there is a connection between both sleep and education and the risk of developing dementia in seniors.

This connection was discovered by tracking seniors who were enrolled in the Framingham Heart Study, which followed 2,500 participants over the age of 60. Over the course of 10 years, 10 percent of these individuals were diagnosed with dementia, with the majority of cases being Alzheimer’s disease. While researchers did not find an increased risk of dementia in those who had been sleeping longer for an average of 13 years, participants who had recently started sleeping nine or more hours a night had almost double the risk.

The study revealed that 20 percent of these new long sleepers were later diagnosed with dementia and were also found to have smaller brain volumes. Co-author Matthew Pase from Boston University School of Medicine rationalized that the extra sleep may be due to chemical changes occurring in the brain, or the development of dementia increasing a patient’s level of exhaustion. While the association found does not indicate a causal relationship between extended sleeping hours and dementia, Pase suggested that further research and monitoring of sleep habits may be beneficial in certain cases. He explained, “If someone reported recently becoming a longer sleeper, they could undergo a memory assessment.”
While disrupted sleep patterns are a common symptom of dementia, it is unclear whether changes to sleeping habits occur before or after the development of the disease. This new research may be useful in diagnosing dementia earlier, as the sudden change in sleep duration could prove to be a warning sign for dementia. A memory test for an individual who has other risk factors for dementia and has begun sleeping longer may prove to be beneficial for early diagnosis.