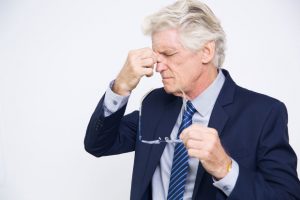 It is classified as an inflammatory disease, and as such, the study focused on the link between stress and inflammation and how it affects the treatment outcomes for the disease. Those experiencing vision loss due to AMD also experience higher rates of stress, anxiety, and depression, though whether these psychological conditions worsen the progression of the disease is unknown.

The study was conducted using the Perceived Stress Scale (PSS) to measure the perceived stress in patients with vision loss caused by AMD. The PSS is a rating scale that predicts objective biological markers of stress as well as the risk of stress-related diseases and has been previously found to be effective in predicting general markers of inflammation.

This scale is distributed in the form of a survey, and for this recent study, 137 patients with AMD who were an average age of 82 filled out the questionnaire. The data was then analyzed by Dr. Bradley E. Dougherty and his colleagues from The Ohio State University College of Optometry. Nine of the ten questions on the PSS survey performed well within the sample and were able to differentiate between patients with higher and lower levels of perceived stress. Also, some responses varied in accordance with the patient’s age and sharpness of vision, though their overall PSS score was not found to be significantly related to vision acuity.
While stress was not found to directly affect the vision loss associated with AMD, Dr. Dougherty explained how the PSS survey could still be useful for patients with the disease, stating, “A psychometrically sound, easy-to-administer questionnaire such as the PSS is important for use with patients with AMD, given the evidence for increased rates of psychological symptoms in the population.”

Previous research has found that stress reduction techniques, such as practicing mindfulness, can lead to improved treatment outcomes for patients with other health conditions and may be useful for those with AMD. As stress is associated with inflammation, and age-related macular degeneration is an inflammatory disease, researchers suggest that stress may impact the progression of AMD, though further research is required to validate this theory.