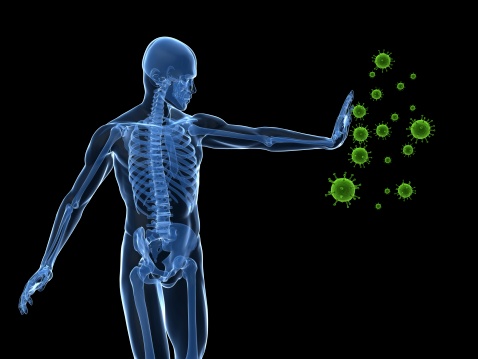 Immune system studies find the key roles of sugar, proteins and molecules. The immune system is our number one defense against illness. It works tirelessly to keep us healthy but sometimes it, too, can make mistakes. This is where allergies and autoimmune diseases come from; the immune system mistakenly attacks its own cells and tissues or mistakes innocent particles for parasites.

Key components involved in the immune system are the tonsils, thymus, lymph nodes and vessels, white blood cells, bone marrow and the spleen. White blood cells work with antibodies and other chemicals to fight off threatening infections which enter the body. The tonsils and the thymus are what make antibodies that fight off threats. The lymph nodes and vessels carry lymph fluid, nutrients and waste material between the body tissue and the blood stream. The lymph nodes filter the fluid by trapping bacteria and viruses and destroying them. Bone marrow produces the white blood cells which are used to fight off infection, and the spleen filters the old blood to make it anew, while also destroying bacteria and foreign substances.

Together the components of the immune system work to ensure you remain as healthy as possible.

Three different studies were recently released that reveal potential to boost the immune system. One study from the University of Zurich found that sugar structures in the antibody play a role in the complement-destruction process of the body’s own tissue.

In the second study, published in The Journal of Immunology, researchers uncovered why certain immune responses, which typically help fight infections, can sometimes be harmful to the brain. The findings reveal how activation of normally protective immune responses cause nerve cells to die and which protein is responsible.

Lastly, from Duke University, researchers uncovered a discovery that could potentially lead to new therapeutic treatments to boost the immune system.


Study: Sugar key to how antibodies work in the immune system

Our immune system is our first defense against illness and our antibodies protect the body against viruses and bacteria. In the case of autoimmune diseases, the immune system’s defense is misguided and responds by attacking itself.

First author of the study, Isaak Quast, said, “We observed that patients suffering from an autoimmune disease felt better the more sialic-acid-carrying antibodies they had in their blood. We managed to demonstrate that antibodies containing the sugar sialic acid only destroy the body’s own cells to a very limited extent. Our data indicates that the coupling of sialic acid to antibodies might be a potential strategy in treating patients with autoimmune diseases.

The findings suggest that immune response can still contribute to cell death even when a virus is not present.

Bacteria, viruses and bugs can hide in what are called vacuoles, making it harder for the immune system to find and destroy them. Researchers uncovered that our bodies create pathogen-containing vacuoles to destroy such bugs, which is known as the “kiss of death.”

Senior author, Jörn Coers, Ph.D., said, “To get rid of these pathogens, the immune system essentially has to find a needle in a haystack. It has to target a single microbe, in a vacuole, in an ocean of other membranes, floating around inside the cell. We found that the immune system accomplishes this feat by painting the vacuole with a coat of ubiquitin, which allows for the recruitment of all these other factors that viciously attack the vacuole and eliminate the pathogen inside.”

Pathogens enter host cells but disguise themselves to be unrecognizable. The immune system then discovers the invasion and begins to work to destroy them. Specific proteins bind to the membranes in order to destroy them.

Further research aims to determine other trick pathogens that invade immune system response. Better treatment can be created once they determine what makes them so dangerous.

Slow wave sleep, or deep sleep, has been found to boost the immune system memory by storing data of antigens. The data is stored the same way memories are formed during the sleep cycle. Continue reading…

Immune system the possible link between nature and health