Home » Hearing Health » Hot ears: What makes your ears hot and how can this problem be treated? 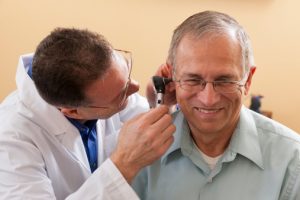 Hot ears are defined by a burning sensation you may feel in either one or both of your ears. This is usually a symptom of other underlying potential health issues or conditions and is characterized by minimal or major pain; redness; flakiness; and ears that are warm to the touch.

Continue reading to learn about the possible causes and symptoms that are associated with hot ears and how these ailments can be identified, prevented, and treated.

What are the causes of hot ears?

As mentioned, hot ears are usually a symptom of one or more possible health conditions you could be unwittingly enduring. Some of them are easier to identify and treat than others, so it’s important to try to diagnose the problem as early as possible to prevent it from getting worse over time.

If you’ve asked yourself on more than one occasion, “Why do my ears get hot?” or “Why is my ear hot?” then here is a list of potential hot ear causes that you should know about:

Yes, believe it or not, your ears can get sunburned just like any other part of your body. It’s astonishing how many people neglect to consider their ears when applying sunscreen. Whether you’re spending a day at a local beach or going on a tropical vacation, it’s always important to properly protect all parts of your body from the harmful UV rays of the sun. When your ears get sunburned, you’ll most likely feel a strong and sometimes painful burning sensation coupled with a searing redness. Eventually, the burned layer of skin will begin to peel, but in the meantime, your best defense against the harmful effects of the sun is to use sunscreen.

Certain emotions, such as embarrassment, anxiety, anger, and sadness, can elicit specific physical indicators. The primary one is radiating heat and redness in the ears, face, and neck. We’ve all had stressful moments in our lives where we’ve experienced something like to this. The good news is that this cause of hot ears typically isn’t a cause for concern as it should subside once you calm down.

This is a condition in which blood flow to your extremities and surface of your body is severely reduced. This can be caused by rapid and unexpected changes in temperature. Vasoconstriction isn’t just relegated to your ears either. It can spread to your nose and cheeks as well.

Both children and adults can experience ear infections to varying degrees. In fact, people who were prone to ear infections as children are more likely to experience them as adults. However, in some cases, this propensity can subside over time as you grow older and your immune system becomes stronger and more capable of fighting off certain viruses. Ear infections generally take place in the middle ear and are the result of bacteria entering and infecting the inner ear canal. Children and adults experience different ear infection symptoms. They include the following: temporarily diminished hearing, ear discharge, pain, fever, headache, slight vertigo, and reduced appetite.

Although RES is a very rare condition with no known etiology, it can be characterized by a potent burning pain and redness of the ears. Unfortunately, this ailment is very difficult to diagnose and treat because no one really knows what causes it or why it happens. Even the most routine minuscule movements or tasks such as lightly grazing your ear, brushing your hair, or moving your neck a certain way can set off the intense pain. Sometimes, emotions such as stress or overexerting yourself can also trigger this condition. RES can affect either one or both ears and some people who suffer from it also experience accompanying migraines or headaches.

We all go through drastic hormonal changes at different stages of our lives. Natural phenomena such as puberty, pregnancy, and menopause, along with medically influenced hormonal changes, can all exhibit a variety of symptoms and hot ears are just one of them. However, once your body hormone levels have stabilized again, all of the symptoms associated with unbalanced hormones will eventually subside.

Formerly known as Mitchell’s disease, this rare physical condition is a vascular peripheral pain disorder that occasionally or frequently blocks blood vessels that are located in the extremities from receiving sufficient blood supply. Some sufferers of this condition only experience it in their face and ears while others feel it exclusively in other parts of their bodies such as their feet and hands. Cutaneous flushing: Flushing in the face and ears can occur as the result of a number of factors including the onset of intense emotional responses, changes in temperature, hormonal changes, and alcohol or drug consumption. All of these factors cause an increased blood flow to certain parts of the face and neck, which causes unceremonious redness.

In some cases, red or hot ears can be a symptom of a skin infection caused by bacteria from a bug bite, cut, or extremely dry skin. Your ears could become inflamed, very painful, hot to the touch, and sensitive. You may also experience fatigue, fever, and chills alongside hot ears if you’re suffering from a skin infection.

This is a common skin condition, the exact cause of which hasn’t been discovered yet. Symptoms include redness and scaly patches on the skin. It’s believed that seborrheic eczema, also known as seborrheic dermatitis, is a genetically inherited autoimmune disorder in which the immune system attacks healthy skin cells.

This is a rare condition or disorder that causes mild to severe painful inflammation in the cartilage located throughout the body, and this can include the ears. The symptoms of this disease have a tendency to subside on their own and return, which is why it’s referred to as relapsing polychondritis. It can become serious or potentially fatal if major organs such as the heart, respiratory tract, or blood vessels are impacted.

Hot ears are symptoms of either minor or serious physical conditions or illnesses that can be prevented and treated in a variety of ways. To protect your ears from getting sunburned, you should regularly apply sunscreen to your skin, even if you live in a cooler climate that doesn’t get a lot of direct sunlight. If you spend a lot of time outdoors, then regular prolonged exposure to the sun can still have a negative impact on your skin.

Washing your hands and moisturizing your skin on a regular basis could also prevent the risk of contracting a bacterial infection. You should wash your hands after using the bathroom, before and after cooking, and especially after touching commonly used surfaces. If you don’t have water and soap immediately available to you, then disinfecting your hands is a good alternative.

Of course, when it comes to situations that involve illnesses such as relapsing polychondritis, prevention, and at-home treatment might not be possible as this is a chronic ailment that requires medical attention.

Once again, since hot ears are typically associated with other physical or medical conditions, there’s no way to directly treat them. In fact, the only way to get rid of red, hot ears is to identify the root cause of the problem and treat that directly. If you have a severe ear infection, skin infection, or are diagnosed with relapsing polychondritis or erythromelalgia, then you should definitely seek out medical treatment for these conditions. Otherwise, your symptoms should clear up on their own.

Any time you’re concerned about your health or are experiencing unusual physical phenomena—including red, painful, and hot ears—you should consult your doctor to rule out any potentially serious illnesses. For the most part, hot ears are generally harmless and the issue often resolves itself with very minimal treatment required; but there are some cases in which it could be symptomatic of something more serious. It’s always better to be safe rather than sorry and know for sure exactly what you’re dealing with.