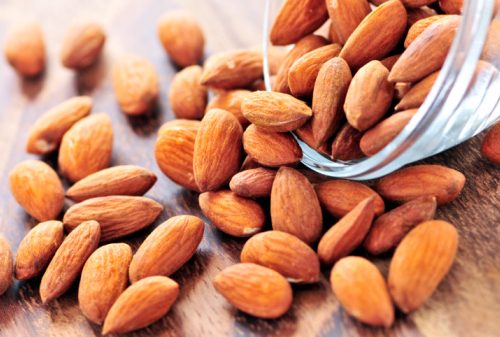 Almonds are continuously in the spotlight for their health benefits along with just being an overall healthy snack. Well, a new study now suggests that your favorite nutty snack could also help to remove cholesterol from the body.

The researchers not only wanted to determine if almonds could improve cholesterol levels but also if HDL function could improve too. Kris-Etherton added, “HDL is very small when it gets released into circulation. It’s like a garbage bag that slowly gets bigger and more spherical as it gathers cholesterol from cells and tissues before depositing them in the liver to be broken down.”

The study included 48 men and women who were put on controlled diets over the course of six weeks. The meals in both groups were near identical except for what they enjoyed for snacks—either almonds or a muffin.

At the end of the six weeks, the researchers measured levels and functionality of HDL cholesterol. These results were then compared to the baseline findings.


The almond diet was found to improve cholesterol levels along with functionality compared to those who ate a muffin as a snack.

Kris-Etherton concluded, “We were able to show that there were larger particles in response to consuming the almonds compared to not consuming almonds. That would translate into the smaller particles doing what they’re supposed to be doing. They’re going to tissues and pulling out cholesterol, getting bigger, and taking that cholesterol to the liver for removal from the body.”

Increasing subpopulations of HDL cholesterol is beneficial because it has been found to further reduce the overall risk of cardiovascular disease.

Although almonds are beneficial to heart health, it’s important you eat them in moderation because they are high in fat and calories. Stick to about a handful a day for optimal benefits.

Related: Why it’s so important to check your cholesterol

Lower your cholesterol with this diet

The dangers of high cholesterol you didn’t know about