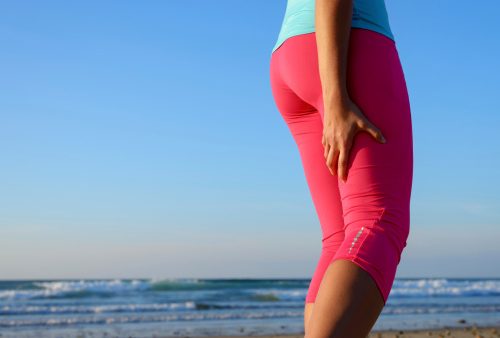 A hamstring strain means that you have pulled one or more of the muscles situated on the back of your upper leg, which we refer to as the thigh. This is the kind of strain that occurs when a muscle becomes overstretched and tears. It can be painful and in some cases makes for difficult movement.

Most of us have pulled a muscle from time-to-time, but a pulled hamstring can be terribly uncomfortable. The three muscles that make up the hamstring are responsible for bending the knee. The muscles are as follows: the semitendinosus, the semimembranosus, and the biceps femoris. They run the length of the thighbone, across the back of the knee and attach to the tibia and fibula. A small part of the hamstring also goes across the hip joint. The hamstring muscles are balanced by quadriceps muscles, at the front of the thigh, and help the knee extend. These muscles work together to help control stability and allow for activities such as walking, running, and jumping.

What are the causes and risk factors of pulled hamstring muscles?

Hamstring strain causes are usually put in one of two categories: primary or secondary. The explanation below further zeros in on what causes hamstring strains.

Overstriding or pelvic control when running, improper warm-up to prepare hamstring muscles for force, inappropriate training loads, such as high-speed work done late in the workout, fatigue, lower back problems, or playing on surfaces that are slippery can cause a secondary hamstring strain.

When we consider causes of hamstring strain, we must look at the risk factors:

A hamstring injury is really rather common but in most cases, the problem clears up quickly and the injured person is able to return to normal activities. However, not all injuries are alike – there are situations where medical care and a longer recovery period are required. Acute hamstring strains are common in sports. For example, it is not unusual for those who play competitive soccer to get a pulled hamstring. Some studies suggest that up to 16 percent of professional soccer players experience hamstring strain.

What are the symptoms of hamstring strain?

When coping with hamstring strain symptoms, some people use a knee splint while others use crutches if they can’t put any weight on the leg. There are also special bandage wraps called compression bandages that can go around the thigh for extra support.

If symptoms are mild, you will likely feel better in anywhere from two to five days. A more severe injury will take weeks or even a full month to start feeling better. There are cases where a hamstring strain needs to be operated on. In these situations, the patient is referred to a sports medicine or orthopedic specialist.

How to diagnose hamstring strain?

Most hamstring injuries can be diagnosed through a physical exam and medical history. A physical examination is used to grade the injury, but an open discussion with the doctor can usually pinpoint the circumstances under which the strain occurred. Previous injury will be taken into consideration since any former problems with the back, hip, or knee can decrease range of motion and have an impact on muscles that cause the hamstrings to be prone to injury. Beyond a physical examination and medical history, tests can be carried out, including those outlined here.

How to treat hamstring strain?

Hamstring strain treatment begins with reducing any pain and swelling. This is accomplished in different ways, including taking a break from activities, using a cane or crutches, applying ice packs, or wrapping the injured area in a compression bandage. Some people find that resting the leg in an elevated position above heart level helps reduce the amount of swelling. Depending on the grade of the hamstring strain, some sufferers do opt for taking an over-the-counter pain medication. Advil, Motrin IB, or Tylenol are some examples of medications that are used to reduce pain and inflammation.

If you have strained your hamstring and the pain is agonizing, it is best to consult a doctor for the best and safest treatment options.

While having a pulled hamstring can be uncomfortable, it doesn’t normally put an end to extracurricular activities indefinitely. Once you deal with the initial pain and swelling of a hamstring injury and a doctor gives you the go-ahead, you can participate in physical therapy, designed to improve flexibility and strengthen your hamstring muscles so you can resume whatever activity you like.