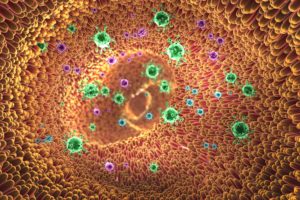 For the first time, scientists have found an association between gut bacteria and fibromyalgia. This new research is the first to show that people who suffer from chronic pain have a variation in microbiome composition.

Fibromyalgia is a chronic disorder that affects two to four percent of the population and has no known cure. It is associated with widespread chronic pain, fatigue, impaired sleep, and cognitive difficulties. Physicians consider these types of symptoms to be subjective, meaning they can’t be determined or measured by tests. Because its symptoms are subjective and there is no apparent cause, fibromyalgia is often misdiagnosed as another disease.

But for the first time, in a paper published in the journal Pain, a Montreal-based research team has shown that there are alterations in the bacteria in the gastrointestinal tracts of people with fibromyalgia. In those suffering from the disease, it was found that there were approximately 20 different species of bacteria that had either greater or lesser quantities over those in a healthy controlled group.

The team for this study included researchers from McGill University and Université de Montréal as well as others from the Research Institute of the MUHC. Dr. Amir Minerbi, from the Alan Edwards Pain Management Unit at the McGill University Health Centre (MUHC), spoke about the study.

“We used a range of techniques, including Artificial Intelligence, to confirm that the changes we saw in the microbiomes of fibromyalgia patients were not caused by factors such as diet, medication, physical activity, age, and so on, which are known to affect the microbiome.”

“We found that fibromyalgia and the symptoms of fibromyalgia – pain, fatigue, and cognitive difficulties – contribute more than any of the other factors to the variations we see in the microbiomes of those with the disease. We also saw that the severity of a patient’s symptoms was directly correlated with an increased presence or a more pronounced absence of certain bacteria – something which has never been reported before.”

Researchers do note that it is unclear whether the changes in gut bacteria in those with fibromyalgia are markers of the disease, or whether they are a cause of it. The next step in the research for this association will be to investigate whether there are similar changes in the gut microbiome in other conditions involving chronic pain such as neuropathic pain, headaches, and lower back pain.

Many patients who suffer from fibromyalgia know all too well that it is a disease that has proved difficult to diagnose. Patients can wait as long as four to five years to get a final diagnosis. But thanks to studies like this, it may be about to change.

“We sorted through large amounts of data, identifying 19 species that were either increased or decreased in individuals with fibromyalgia,” says Emmanuel Gonzalez, from the Canadian Center for Computational Genomics and the Department of Human Genetics at McGill University. “By using machine learning, our computer was able to make a diagnosis of fibromyalgia, based only on the composition of the microbiome, with an accuracy of 87 percent. As we build on this first discovery with more research, we hope to improve upon this accuracy, potentially creating a step-change in diagnosis.”

This study will lead the way to other research exploring whether gut bacteria play a role in the development of the pain associated with fibromyalgia. This could eventually help in finding a cure, as well as a way of diagnosing the illness.