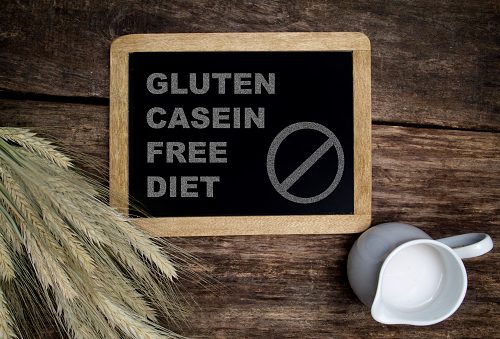 Over the last decade, gluten-free, casein-free (GFCF) diet has become a common option for autism treatment, but a comprehensive U.S. study has concluded that it has no real impact on a child’s behavior.

The study conducted at the University of Rochester Medical Center (URMC) followed a group of children between two and five years old over 30 weeks and implemented a strict gluten-free, casein-free diet for each child. Foods were slowly reintroduced as the children’s attention, activity, sleep patterns, and bowel movements were monitored. As it turns out, there were no changes when the kids were given foods with gluten, casein, a combination of gluten and casein, or a placebo.

Gluten is found in cereal grains, especially wheat. A combination of proteins, it is known to cause illness in people with celiac disease. Casein is a main protein found in milk and cheese. It is used in processed foods, as well as industrial products, such as adhesives and paints.

Autism is a complex disorder that is characterized by varying degrees of difficulty in social interaction, verbal and non-verbal communication, as well as repetitive behavior.

The recent study on gluten-free, casein-free diet as it relates to autism was published in the Journal of Autism and Development Disorders. The authors say the results have prompted them to remind parents that a GFCF diet can meet a child’s nutritional needs, but professional advice about adequate calcium and vitamin D intake should be considered.

The study, which involved a blind food distribution so that the children and their families could not tell which snacks they were getting, screened for allergies and gastrointestinal disorders to see if these kids can benefit from dietary changes. Each participant received a total of three food challenges, with no challenge leading to “statistically significant differences”. The children were then followed for additional 12 weeks to see if there was any lasting impact. Again, no significant changes have been found.

Experts say that it has taken a long time to conduct a study on GFCF diet for autism because they needed to control for all the potential outside factors, such as gut disorders the children might have.

Although the conclusion was that gluten-free, casein-free diets have no significant positive impact on the behavior of autistic children, the researchers have suggested that further study is needed on nutrition and autism, in light of the fact that many people with this disorder seem to have gastrointestinal and bowel problems. They have also pointed out that there are more restrictive diets that might influence autism.


What is the gluten-free casein-free (GFCF) diet for autistic children?

When it comes to the gluten-free casein-free diet for autism patients, it is important to understand what you are doing. When you are going for GFCF diet, all foods that contain gluten and casein are removed from the child’s food intake.

Some people have concluded that their autistic child is sensitive to foods that contain gluten or casein. Changes in behavior, speech, and bowel movements are among the benefits that parents have reported. The popular theory is that children with autism process peptides and proteins in a different way than other people do. This different processing could make autism symptoms worse. Some people believe that the brain treats these proteins like opiate chemicals, thus leading the child to act in a certain way. When parents turn to an autism diet menu, it is usually with the understanding that it will not cure their child, but may reduce symptoms and therefore improve social behaviors, cognitive behaviors, as well as speech.

Although some research has suggested there are abnormal levels of peptides in the bodily fluids of some people who have autism symptoms, the real effectiveness of GFCF diets has not been supported by a lot of scientific study.

If you have a child with autism and you are considering the gluten-free, casein-free diet, many physicians recommend that you consult with a professional nutritionist or dietician. It is easy to find gluten-free, casein-free diets by simply conducting a quick search on the Internet. However, professionals will have the knowledge to guide you on whether your child is getting what they needs for normal growth and development. Foods that contain gluten and casein are major sources of protein, as well as essential vitamins and minerals, including vitamin D, calcium, and zinc. These, of course, are all important to your child’s overall health.

A gluten-free diet is known to aid in celiac disease, but it may also be able to improve your psoriasis as well. Many psoriasis patients have opted to go gluten-free and have found relief for their psoriasis even though there is little scientific evidence to support this practice. Continue reading…

More research seems to suggest a link between ADHD and autism that could lead to the development of useful behavioral therapy treatments. Jean Gehricke is the well- known associate professor of pediatrics at University of California, Irvine and he’s a clinical psychologist with the Center for Autism and Neurodevelopmental Disorders. Continue reading…