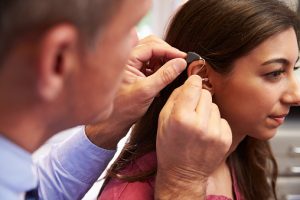 Having the ability to hear is one of our beneficial senses. We can listen to music, hear when people are calling us, and even just appreciate silence when getting the opportunity. Sadly, hearing loss affects millions of people around the world and there are many different causes for its development.

One such form stems from a hereditary condition called Usher syndrome type 3 (USH3), which causes progressive hearing and vision loss, most commonly in their teenage years.

Recent developments in hearing loss research may provide Usher syndrome sufferers with some relief. Researchers from Case Western Reserve University School of Medicine may have found a way to stop the progression of this form of hearing loss, leading to significant preservation of hearing.

A rare condition caused by a gene defect

Usher syndrome type 3 is a condition primarily found in people of Finnish background and Ashkenazi Jewish descent. By middle age, most affected individuals become completely deaf, but disease course can vary from patient to patient.

The condition is linked to a defect in the sensory hair cells found within the inner ear. These cells can detect movement in their environmental form sound waves which then get converted into a neural signal that can be interpreted by the brain. A mutation in a gene called “Clarin-1” is mutated in those with Usher syndrome type 3 and causes a defect in these hearing cells.

The researchers of this study found that by using gene therapy, they could successfully reduce the effect that this gene mutation has on mouse models. This form of therapy involves transplanting normal genes into cells in place of malfunctioning or missing ones in the hopes of repairing genetic disorders.

Replacing defected genes with normal ones

They achieved this result by first inducing a gradual hearing loss in mice that would parallel the progressive nature found in those suffering from Usher syndrome type 3 by disabling their Clarin-1 gene. This is the first time this type of hearing loss was mimicked in mice models, helping to pave the way to investigate various treatment methods for human benefit.


Next, the normal Clarin-1 genes were inserted into the ears of mice through gene therapy before the onset of hearing loss, demonstrating great effectiveness. They proved this may measure the level of decibels the mice could hear.

Normally, by age 80-90 days, untreated USH3 mice couldn’t hear 100 decibels of sound, which is akin to the sound of a running snowmobile or a busy wood shop. But gene therapy changed this.

“We found that gene therapy blocked progressive hearing loss and improved hearing in treated mice by nearly four orders of magnitude compared to untreated sibling controls. The treated mice could hear at 45 decibels until about five months of age when we concluded our study. This is significant preservation of hearing and could dramatically change the lives of hearing-impaired children and adults since, while the age of USH3 onset in people is typically three to ten years of age, hearing loss in USH3 can surface as late as age 30,” said Kumar Alagramam, Ph.D., an associate professor of otolaryngology, genetics and genomic sciences.

The researchers believed that if this form of therapy is implemented before the onset of symptoms, it would help many people. However, before this can be implemented, human studies need to take place, but they project that it will become a reality for USH3 suffers within the next 10 years.

Related: Fall foods that can help your hearing