Home » Weight Management » Exercise » Exercise like this for good health 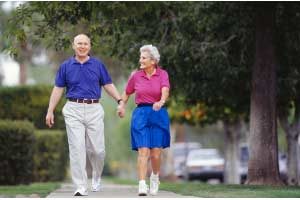 These days, we hear so much about the benefits of high-intensity interval training (HIIT). But no matter all the pros to this type of exercise, it’s not advisable for people who lead a largely sedentary lifestyle – and that’s a lot of us. We like our TV time and just relaxing in easy chairs…

Generally, those intense, interval-style exercises – brief bouts of physically exertion broken up by periods of recovery – have been proven to lead to fitness and good health. But for people new to exercise or with mobility challenges, high-intensity interval training isn’t a one-size-fits-all approach to good health. Until now, that is.

Research out of Japan has found there’s a way to get the benefits of intensive exercise in intervals that won’t have you leaving the gym injured or intimidated. It’s relatively simple: Walk hard, walk easy and then repeat!

The new findings have revealed ways in which walking can easily, and effectively, incorporate HIIT exercise into your daily routine. You’ll become more fit and strong, and you’ll also achieve better blood pressure control, according to Japanese researchers.

Last decade, scientists led by Dr. Hiroshi Nose, of Shinshu University Graduate School of Medicine in Matsumoto, Japan, began working on walking programs. They already knew that walking was the simplest form of exercise for those middle-aged and older.

But researchers wondered if people needed to better motivate themselves in order to achieve the good health benefits of exercise. They designed an exercise regimen made up of three minutes of fast walking (at a pace of roughly six or seven on a scale of exertion between one and 10), followed by three minutes of gentle strolling.

In the team’s first experiment in 2007, walkers between the ages of 44 and 78 completed five sets of intervals, for a total of 30 minutes of walking at least three times every week. Meanwhile, a separate group of older participants walked at a continuous, moderate pace – about a four on the same exertion scale. After five months or so, the fitness and health of the older, moderate group had barely improved.

The interval walkers, on the other hand, greatly improved their fitness, including their leg strength and overall blood pressure. Walking, once you get used to it, is a lot more enjoyable than swallowing prescription drugs for your blood pressure.

HIIT exercise by walking is easy to maintain

In the latest study, published in the Journal of Applied Physiology in December, Dr. Nose’s team reported that the majority of study participants continued their walking program long after their original five-month commitment.

In fact, just two years later, nearly 70 percent of all walkers still followed their exercise regimen at least three times each week. They also retained good health or improved upon the same. Those who quit often cited “family, health and job issues,” although they hardly complained about the complexity and difficulty of their individual training. Walking is relatively easy and enjoyable, as I mentioned. It’s natural, good exercise.

To note, three days of exercise every week is pretty ideal, but if that’s too much work, just try squeezing in those 10-minute walks whenever you can. It’s proven to help your overall health and your blood pressure.

Have you ever found yourself on an energy slump in the afternoon and reaching for a quick fix? Maybe your mind has wandered to the idea of a triple espresso, a Red Bull or a seemingly innocent “energy boosting” health drink. Well there’s a natural fix to give you a boost.

It all comes down to diet and exercise. There’s another reason to get active – exercising could slow down diseases that cause blindness, scientists now say.