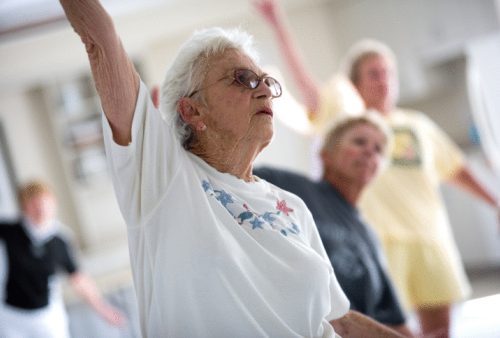 It all comes down to diet and exercise.

Believe it or not, exercising could slow down blindness-causing diseases, scientists now say.

A new study, conducted by Emory University and Atlanta VA Center for Visual and Neurocognitive Rehabilitation, suggests that aerobic exercise may curb the progression of diseases that destroy the eye’s retina and lead to blindness. The research was funded by the National Eye Institute, Department of Veterans Administration Affairs, and the Katz Foundation – and published in the Journal of Neuroscience.

RELATED READING: Quitting Smoking Can Save Your Vision

After two weeks of physical activity, mice from both groups were exposed to lights bright enough to affect their retinas for four hours while the others were exposed to dim ones. As a result, the bright lights caused a 75 percent loss of both retinal function and photoreceptors, according to researchers. But the exercised mice exposed to bright light experienced retinal function and photoreceptors two times greater than inactive mice.

In other words, in all of the mice exposed to harmful, bright lights, the ones that had regularly run on treadmills had much better success with their retinas than mice that had not been exercising at all.

This is the first time simple aerobic exercise has been shown to have an effect on retinal health and vision. The findings indicate that exercise may be used as a single treatment in all human eye diseases, particularly age-related macular degeneration (AMD), which is a leading cause of blindness in older people.

Today, more than 2 million Americans above the age of 50 show signs of advanced AMD, the stage that leads to severe vision impairment, according to the American Academy of Ophthalmology.

Because the symptoms can be subtle and gradual, many people are not aware they have AMD. The blurring of central vision is the main one, although peripheral vision – or the outer vision – is not affected. Generally, people with AMD find it much more difficult to read, write, drive and even recognize faces.

In the meantime, it’s important to know all of the risks for AMD: exposure to light, high blood pressure – or hypertension, high cholesterol or obesity, and smoking.

Although it mainly affects older adults, younger people with a genetic condition are susceptible. Race, too, can be factor. A higher percentage of Caucasian-Americans develop AMD compared to African-Americans.

Keep up with the carrots and other nutrient-rich veggies for eye health, and get your heart rate pumping.