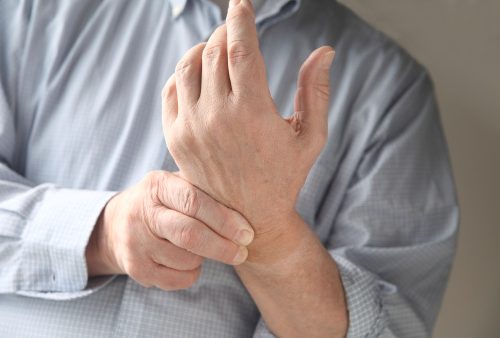 Crohn’s disease, an autoimmune digestive disorder, is a risk factor for arthritis and joint pain. Inflammatory bowel disease (IBD) refers to two disorders: Crohn’s disease and ulcerative colitis. In both conditions, inflammation of the intestines occurs as the body’s immune system attacks healthy cells in the digestive tract, making them autoimmune diseases as well.

Enteropathic arthritis is part of a group of conditions known as spondyloarthropathies, which also includes conditions like ankylosing spondylitis, psoriatic arthritis, and reactive arthritis. The term “enteropathic” refers to a disease related to the intestines.

Having Crohn’s disease puts you at an increased risk of developing certain forms of arthritis, including peripheral arthritis, axial arthritis, and ankylosing spondylitis.

Peripheral arthritis: Affects hands, wrists, elbows, knees, and feet. This form of arthritis does not cause damage to cartilage or bone.

Axial arthritis: Affects the spine, back, and hips, and can begin even before symptoms of Crohn’s are present. This form of arthritis can lead to bone damage.

Ankylosing spondylitis: Severe spinal arthritis, which can contribute to inflammation of the heart valves, lungs, and eyes.

Although arthritis is linked to Crohn’s, arthritic joint pain may also occur due to medication side effects, Speaking to your doctor when symptoms present themselves can narrow down what the true cause is.

How Does Enteropathic Arthritis Develop?

Preliminary studies have shown that higher levels of IL-23 found in Crohn’s disease patients are what may increase their risk for enteropathic arthritis. Further research is required in this area in order to develop better treatment methods.

The main difference between arthritis and Crohn’s arthritis is that Crohn’s often does not cause damage like other forms of arthritis. Furthermore, if Crohn’s disease is well managed and treated, the joint pain will subside. Lastly, in some cases, joint pain can be present prior to a diagnosis of Crohn’s disease and can be an early indicator of the disease.

If joint pain does linger even after Crohn’s disease goes into remission, then other therapies may be utilized to control and manage the pain.

The most common complaint is lower back pain that is at its worst in the morning. Exercise has been found to improve such pain and improve range of motion.

How to Diagnose Enteropathic Arthritis

Your doctor will first need to evaluate all your symptoms and medical history to begin the diagnostic process for enteropathic arthritis. Your doctor will then ask you specific questions regarding your symptoms including if you experience back pain or stiffness, more so in the morning or when sitting or standing for prolonged periods of time. They’ll also ask if you experience red or swollen joints.

Specific diagnostic tests used include gathering a stool sample to test for inflammatory bowel disease if you haven’t already been diagnosed; a colonoscopy to look for inflammation and to take a biopsy to confirm IBD diagnosis; x-rays to have a look at your joints to rule out any other issues; and synovial fluid aspiration, where a sample of synovial fluid is taken through a thin needle to be tested.

For starters, your doctor can prescribe and recommend a slew of medications including anti-inflammatories, immunosuppressing drugs, and corticosteroids.

Biologics are another class of drugs being used to treat autoimmune diseases such as IBD and rheumatoid arthritis, as they help to suppress the immune system, which is overactive in autoimmune diseases. Types of biologics include etanercept, adalimumab, infliximab, and golimumab. Biologics block the chemicals in the body that trigger inflammation.

Salicylic acid-type medications are used to treat the gastrointestinal disorder along with arthritis. This type of medication is most successful in ulcerative colitis patients, and not so much in Crohn’s disease patients.

TNF-alpha inhibitors are a type of biologic that has been shown to be effective in Crohn’s disease patients and ulcerative colitis patients. They can be administered through injection, making them more effective.

Disease-modifying antirheumatic agents (DMARDs) have also been found to be successful in both IBD and arthritis as they interrupt the inflammatory response of the immune system.

Nonsteroidal anti-inflammatory medications can be useful but should be used with caution as long-time use can have negative effects on the digestive system.

Your doctor will determine the best mode of treatment based on the severity of your condition. You may need to try a few different treatments and combinations before you finally start to experience long-term relief.