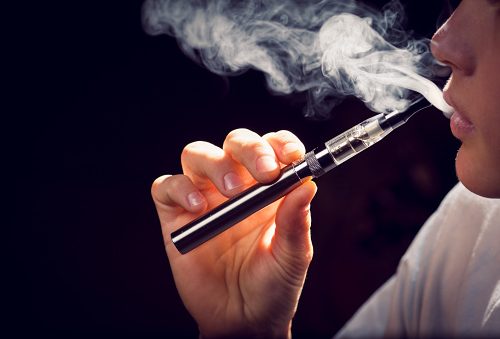 Nearly half a million people die from cigarette smoking each year in the United States alone. Over 40,000 of those deaths are attributed to second-hand smoke. Despite these troubling statistics, an estimated 36.5 million Americans still smoke.

Tobacco smoke contains over 4,000 chemicals, some of which are known cancer causing agents. But the reason smokers continue to smoke is because of nicotine, a highly addictive substance in tobacco. However, nicotine is not the reason why cigarettes are so deadly. Burning tobacco releases the harmful chemicals.

The pursuit of smoking cessation

Nicotine patches and gums are some of the methods smokers use to help kick the habit with moderate success. A new study finds that people who switch to e-cigarettes, a relatively new method of nicotine delivery, were more likely to stop smoking altogether than those who didn’t.

Known as vaping, the use of e-cigarettes has been sweeping the nation. While it may appear like smoking a traditional cigarette, what is actually being exhaled is water vapor. The ingredients used in e-cigarettes typically consist of very few ingredients. It’s usually a mixture of water, nicotine, flavor, and vegetable glycol.

The study in question analyzed and compared data from the U.S. Census between the years 2001 and 2015. The researchers found that about two-thirds of e-cigarette users tried to quit smoking compared to 40 percent of non-users.


E-cigarette users were more likely to succeed in quitting for at least three months than non-users.

While it is true that the rate of quitting has remained steady at about 4.5 percent for years, the researchers found that the rate spiked to 5.6 percent between 2014 to 2015. That’s when e-cigs hit the main stream.

This spike in people quitting smoking was the first in nearly 15 years, according to the researchers.
E-cigarettes may not be entirely attributed to this though, as national anti-smoking campaigns have made significant strides in promoting smoking cessation.

However, e-cigarettes are still considered a new technology and their effects on the human body have not been extensively studied at this point in time. Years of follow-up and meticulous research will be required to fully endorse the potential smoking cessation method.

“Although the long-term safety of e-cigarettes is unclear, any ill effects are likely to be rare compared with the harms of continuing to smoke. If every smoker was to change over to e-cigarettes completely, there would be a dramatic and almost immediate public health benefit,” said Chris Bullen, a professor of public health at the University of Auckland.