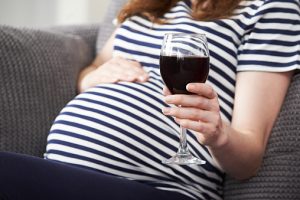 Pregnant women are one of the most protected and cared for individuals in society, and rightfully so, as they carry the next generation in their bodies. Pregnancy can take a great toll on a woman, causing back pain, swelling of extremities, and constant fatigue.

In addition to all of this, pregnant women are tasked with keeping their unborn baby safe from harm, including direct injury and toxin exposure. This also means they have to kick harmful habits such as smoking or drinking, as they can harm the growing fetus.

Sadly, not all soon to be mothers adhere to this protection plan, continuing their habits throughout their pregnancy. A new study finds that women who drink alcohol [ethanol] while pregnant not only negatively affect the baby but also impact brain development that leads to adverse outcomes for future grandchildren.

“Traditionally, prenatal ethanol exposure (PrEE) from maternal consumption of alcohol, was thought to solely impact directly exposed offspring, the embryo or fetus in the womb. However, we now have evidence that the effects of prenatal alcohol exposure could persist trans-generationally and negatively impact the next-generations of offspring who were never exposed to alcohol,” said Kelly Huffman, a psychology professor at the University of California, Riverside.

Consuming alcohol while pregnant can have a whole range of harmful effects on the developing baby. Some of these include:

Alcohol affects the brain of a fetus

Previous research from the team has shown that PrEE impacts a part of the brain called the neocortex. In this region, behavior and cognition are controlled in humans. If the neocortex becomes damaged, it can lead to abnormal behavior and increased anxiety in the exposed offspring.
Subsequent mouse studies have found strong evidence that in-utero ethanol exposure generates neurobiological and behavioral effects in succeeding generations.

“We found that body weight and brain size were significantly reduced in all generations of PrEE animals when compared to controls; all generations of PrEE mice showed increased anxiety-like, depressive-like behaviors and sensory-motor deficits. By demonstrating the strong transgenerational effects of prenatal ethanol exposure in a mouse model of FASD [fetal alcohol spectrum disorder], we suggest that FASD may be a heritable condition in humans,” said Huffman.

The researchers hope that the results of this study will further strengthen a mother-to-be and her resolve to keep her baby’s health in mind while pregnant. Knowing that the effects of ethanol exposure persist across generations, affecting more than just one life, is truly a sobering thought.