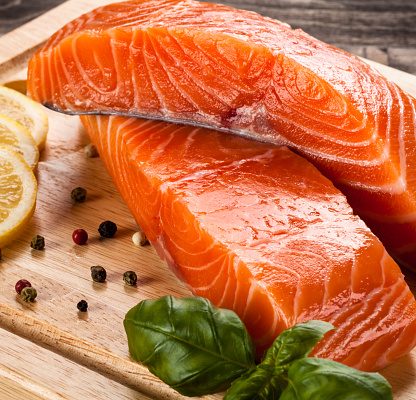 When you’re pursuing a menu at a restaurant, that wild caught salmon is often overlooked in lieu of a more savory dish like a rack of lamb or that sirloin steak. While this may decision may be a joy for the taste buds, you might be robbing yourself from the benefits that occasionally eating fish can give you.

According to a new study out of the University of Pennsylvania, eating fish at least once a week resulted in better sleep and higher IQ scores, compared to those who consumed fish less frequently or not at all.

This is thought to be the result of the significant amount of omega-3 fatty acids that fish contain. This study is the first time a connection has been made between omega-3, improved intelligence, and better sleep.

This benefit to sleep is a possible reason for the observed findings to increased intelligence, according to the researchers.

They stress, however, that their research is still in the early phases and that more work will need to be done to definitely say that this is a direct result of consuming omega-3 fatty acids. Additionally, the researchers looked specifically only at food sources of the fatty acids and not supplements.

Looking at hundreds of children

The study in question looked at over 500 kids between the ages of nine and 11 years old in China. Of which, 54 percent were boys and 46 percent were girls. Each month they would be tasked with repeating questionnaires about how often they consumed fish over the past month, with options ranging from “never” to “at least once per week.”

An IQ test was also taken called the Wechsler Intelligence Scale for Children-Revised, which examines verbal and non-verbal skills such as vocabulary and coding.


The parents were also tasked with filling out questionnaires about sleep quality of their children, which asked about sleep duration, sleep frequency of night waking, and whether there were any issues with daytime sleepiness.

To help keep their test accurate, additional information was considered taking into account parental education, occupation, number of children in the home, as well as the marital status of the parents.

Improvements in both sleep and IQ found

After analyzing all the data, it was found that children who reported eating fish on a weekly basis scored 4.8 points higher on IQ tests compared to those who ate fish rarely. Those who stated that they only ate fish sometimes scored 3.3 points higher. Eating fish was also associated with fewer sleep disturbances, indicating better overall sleep quality.

“It adds to the growing body of evidence showing that fish consumption has really positive health benefits and should be something more heavily advertised and promoted. Children should be introduced to it early on,” said Jennifer Pinto-Martin, executive director of Penn’s Center for Public Health Initiatives.

Future studies plan to look deeper into the types of fish being consumed and randomized controlled trials will be done to show that eating fish can lead to better sleep and better school performance.