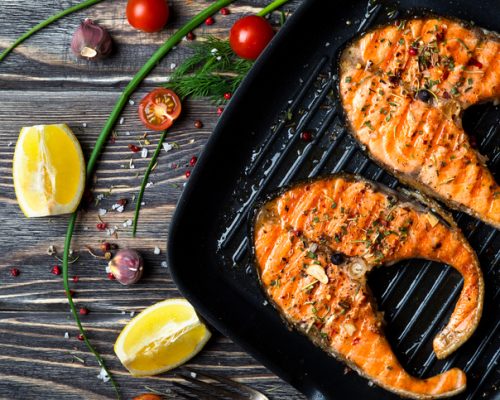 The study included 1,219 people over the age of 65, free of dementia, who provided information regarding their diet and had their blood tested for beta-amyloids. The researchers specifically looked at 10 nutrients with regards to cognitive function.

The researchers found that those who consumed the most fish had 20 to 30 percent lower blood beta-amyloid levels. The results still remained after adjusting for other risk factors including age, education, gender, and whether or not a person had the APOE gene which is a risk factor for Alzheimer’s disease.

In a previous study, researchers found that people who eat baked or broiled fish every week can boost their brain health and lower their risk of Alzheimer’s and mild cognitive impairment (MCI).

It is believed to be the first ever study to directly link fish consumption with brain structure and Alzheimer’s risk. Just one serving of fish a week (lower than the generally recommended amount of two) led to better preservation of gray matter in the brain areas where Alzheimer’s disease tends to strike.

Researchers took 260 healthy adults and gathered information on fish consumption. Of them, 163 ate fish on a weekly basis; the majority one to four times per week. The researchers then tried to determine if preserved gray matter linked with fish consumption reduced Alzheimer’s risk. When gray matter volume is higher, the brain is stronger, healthier.

They found that consuming baked or broiled fish was positively associated with gray matter volumes in three key areas of the brain. It reduced the risk for MCI or Alzheimer’s almost fivefold.

Essentially, the fish promotes stronger neurons in the brain’s gray matter by making them larger and healthier. The results also demonstrated increased levels of cognition in people who ate the fish. This included working memory, which allows people to focus on tasks and commit information to short-term memory. Working memory is destroyed by Alzheimer’s. But people who ate fish each week had higher levels of working memory.

A more recent study uncovered that eating baked of broiled fish once a week boosts brain health. Senior investigator James T. Becker explained, “Our study shows that people who ate a diet that included baked or broiled, but not fried, fish have larger brain volumes in regions associated with memory and cognition. We did not find a relationship between omega-3 levels and these brain changes, which surprised us a little. It led us to conclude that we were tapping into a more general set of lifestyle factors that were affecting brain health of which diet is just one part.”

Lead investigator Cyrus Raji added, “The subset of CHS participants answered questionnaires about their eating habits, such as how much fish did they eat and how was it prepared. Baked or broiled fish contains higher levels of omega-3s than fried fish because the fatty acids are destroyed in the high heat of frying, so we took that into consideration when we examined their brain scans.”

Those who ate baked or broiled fish at least once a week had greater gray matter volume in the brain in areas responsible for memory.

Dr. Becker concluded, “This suggests that lifestyle factors, in this case eating fish, rather than biological factors contribute to structural changes in the brain. A confluence of lifestyle factors likely are responsible for better brain health, and this reserve might prevent or delay cognitive problems that can develop later in life.”