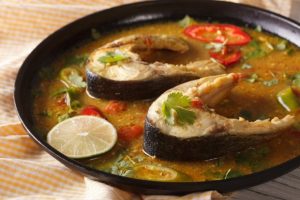 A new study found that consuming fish at least twice a week could significantly reduce pain and swelling associated with rheumatoid arthritis.

Study author Dr. Sara Tedeschi explained, “We wanted to investigate whether eating fish as a whole food would have a similar kind of effect as the omega 3 fatty acid supplements.”

Generally, the essential omegas found in fish tend to be lower than those consumed in supplement form.

For the study, 176 participants increased their weekly consumption of fish. The researchers found that as fish consumption increased, disease activity score lowered.

Rheumatoid arthritis is an autoimmune disease where the immune system wrongfully attacks the joints, causing swelling, inflammation, limited mobility, and pain. It is estimated that 1.5 million people live with rheumatoid arthritis, and women have higher rates of the debilitating form of arthritis than men.


Link between diet and arthritis

The study unveiled a link between diet and arthritis, and although this is not a new concept, it is interesting to note that food plays as important a role in disease management as prescription medications. Also, changes in diet are often harmless and pose minor risk to the patient, so trying out different diets is generally a safe way to manage disease without side effects.

The researchers cannot conclude that fish is the reason for reduced inflammation. It may also be that those who consume more fish tend to be healthier overall.

Although the researchers cannot make definite conclusions between fish consumption and disease activity, Tedesch noted “that the absolute difference in the disease activity scores between the group that ate fish the most frequently and least frequently was the same percentage as what has been observed in trials of methotrexate, which is the standard of care medication for rheumatoid arthritis.”

The findings were published in Arthritis Care and Research.

Palindromic rheumatism (a cause of rheumatoid arthritis): Causes, symptoms, and treatment

Rheumatoid arthritis and kidneys: Protecting your kidneys from RA