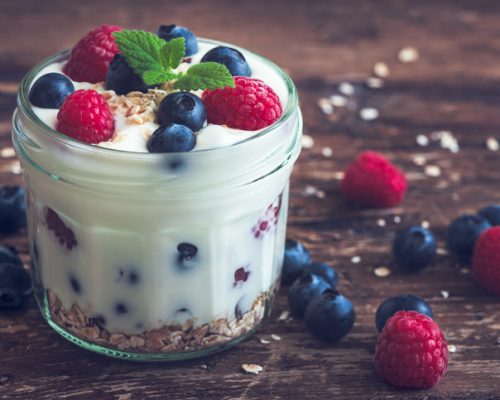 When it comes to strong bones, you know that drinking milk is the option to pick, but a new study suggests one particular food can go a long way in maintaining strong bones.

The study examined postmenopausal women as they are at the highest risk for osteoporosis, a bone disease that is associated with an increased risk of fractures due to bone loss.

The study found that regular consumption of yogurt reduced bone loss among postmenopausal women. This led researchers to believe that eating yogurt regularly goes beyond simply supporting a healthy lifestyle.

Yogurt doesn’t only provide calcium, but also essential proteins and probiotics that are beneficial for the gut and bones.

The researchers wrote, “We investigated the influence of yogurt consumption on bone mineral density (BMD) and microstructure changes in a cohort of healthy postmenopausal women.”

The researchers used food questionnaires to evaluate yogurt consumption along with total calcium and protein intake at baseline. The final analysis included 773 postmenopausal women who were followed for approximately three years.

Yogurt consumption was associated with lower body mass index, increased physical activity, and greater intake of calcium and protein. Compared to women who never consumed yogurt, those who did had greater lumbar spine bone mineral density, distal 1/3 radius BMD, and tibia cortical area. The association was still present even after adjusting for body mass index, physical activity, and calcium and protein intake.

Lead researcher Dr. Emmanuel Biver and the researchers wrote, “[The findings suggests] yogurt may be more than just a marker of healthy lifestyle. Whether influence on the gut microbiota may contribute to this specific protective effect of fermented dairy product remains to be investigated.”

If you aren’t consuming yogurt often, it may be a good idea to make it a part of your regular diet. Yogurt has been found to offer numerous health benefits, which include strengthening bones and maintaining digestive health.