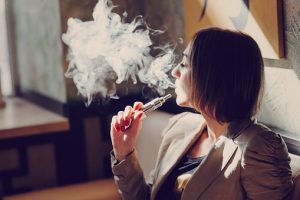 The vitals were measured for a period of two hours, from before the smoking commenced, during the smoking period, and for additional time after smoking had stopped. The researchers defined the smoking period as five minutes, the average length of time for smoking one cigarette, for all the groups.

The results showed that the participants who smoked the e-cigarettes containing nicotine had similar or the same vitals as those who smoked the regular cigarettes. This included cardiovascular elevation and increased blood pressure for a long period after smoking had stopped. Peripheral systolic blood pressure was significantly increased for 45 minutes after participants smoked an e-cigarette and for 15 minutes after smoking a regular cigarette.

Those who smoked the e-cigarettes also showed an increased heart rate, an increase of 8 percent for the first 30 minutes after smoking. There was also a raised heart rate in the participants who smoked the regular cigarettes for 30 minutes after smoking and there was no significant increase shown in those who used the nicotine-free e-cigarettes. “The increased parameters within the nicotine-containing devices might be a link to an increased cardiovascular risk which is well known for cigarettes,” wrote the researchers.

In the published study, the researchers concluded: “Future trials should focus on chronic effects of vaping nicotine-containing or nicotine-free liquids on peripheral and central blood pressures as well as on arterial stiffness. Since no endothelial dysfunction nor gender differences were described for three different arms in literature, it would be important for future trials to address these items.”

This study shows a clear indication of the dangers that e-cigarettes containing nicotine pose to cardiovascular health, which are similar to if not exceeding the risks that are related to the use of regular cigarettes. Future research will be needed to identify the long-term risks of using e-cigarettes on the development of cardiovascular disease and other major health issues.

Other Side Effects of E-Cigarettes

This is not the first time that the safety of e-cigarettes has been called into question. Since the new form of smoking became popular, they have been marketed as a “healthier” version of cigarettes, but many have had their doubts and, it turns out, for good reason.

So far, the research has been clear: e-cigarettes should not be used in the long-term and do not provide a healthier alternative to regular cigarettes.