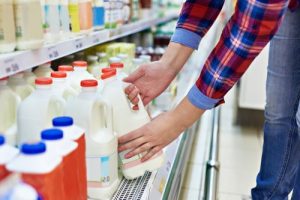 Post-menopausal women are at a higher risk of developing many health conditions, which is why it’s vitally important that women maintain their overall health and wellness during this time.

After menopause, women suffer from a lack of the sexual reproductive hormones progesterone and estrogen. These hormones have large impacts on many of the body’s systems, meaning women must be even more vigilant when it comes to taking care of themselves.

A recent study has found that drinking milk two or more times a week can increase lean body and muscle mass in post-menopausal women. This is due in part to the effect estrogen plays in the absorption of calcium into the body. With the lack of estrogen experienced after menopause, women are less able to process calcium and are recommended to increase their calcium intake by drinking more milk. The study attempted to determine the other health benefits that drinking milk can have in postmenopausal women.

The study used 85 Japanese women between the ages of 40 and 60 as the participants in the cross-sectional exploration. The researchers divided the women into groups based on their self-reported consumption of milk through a survey: those who were drinking milk two or more times a week, and those who were drinking milk fewer than twice weekly. The survey also registered whether the women drank low-fat, normal fat, or high-fat milk.

Despite their milk preferences, those who consumed milk two or more times a week showed increased lean body and muscle mass than the participants who did not consume milk that frequently or at all. The proportions of lean body mass, body fat, and body water were measured against the average data for the participants’ age.

The researchers also ensured that all the participants demonstrated relatively the same amount of protein intake, despite their self-reported milk consumption, to avoid bias. It is speculated by the researchers that the increased intake of vitamin D attributed to the consumption of milk (due to the vitamin D found within it) was the reason behind the increased muscle mass associated with the participants who consumed milk twice or more weekly. Previous research has shown that a lower intake of vitamin D is related to the loss of muscle mass, which lends itself to these results.

In the end, these results are limited to the fact the researchers used a very specific demographic of women to survey the data from, although it is a general recommendation for women above a certain age to increase her daily intake of calcium to avoid such medical conditions as osteoporosis.

As milk is one of the leading sources of calcium, it makes sense that increasing one’s intake of milk would increase health benefits associated with calcium intake. In this case, the health benefits are derived from the vitamin D in the milk rather than the calcium, however.