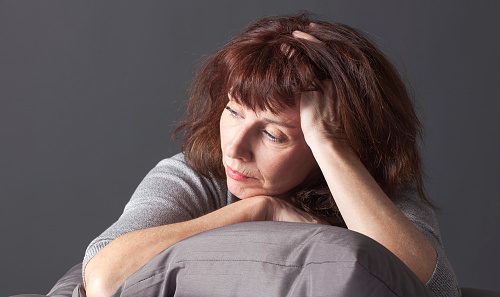 Menopause and depression are generally two separate conditions that have more in common than you might think. This period in a woman’s life, going from a reduction in menstrual periods to when menstruation stops entirely, was found to predispose them to be twice as likely to suffer from the symptoms of depression compared to men, according to researchers from Harvard University.

Additionally, women far into their post-menopausal years with a past history of depression or who have suffered from server premenstrual syndrome (PMS) appear to be at significantly higher risk for developing symptoms of depression as well.

Causes of menopausal and postmenopausal depression

Menopause occurs as a result of hormonal changes in a woman’s body, particularly a decline in estrogen and progestogen. These hormones previously regulated the menstrual cycle but begin to decline during the menopausal age range. Other scenarios can induce menopausal-like symptoms, such as having a hysterectomy, chemotherapy, and primary ovarian insufficiency. This hormonal change can present with a whole host of varying side effects including hot flashes, mood swings, and depression.

Estrogen levels may continue to decline after menopause. It is believed that this hormone also helps to block the breakdown of serotonin, a neurotransmitter in the brain that contributes to feelings of well-being and happiness. Estrogen is also known for affecting endorphin release, a group of chemicals associated with stress management and emotions.

Psychological factors may also play a role, as feelings of no longer being fertile, anxiety over what will happen upon retirement or even the sadness that comes with children leaving home to begin their own lives can take an emotional toll. Relationships may also suffer as menopausal women typically experience a decreased libido due to factors like vaginal dryness impacting sex life.

The physical effects that menopause put on women will also play a part. Hot flashes, one of the most common side effects of menopause, is known for increasing a women’s risk of developing insomnia. It was reported that up to 30 percent of postmenopausal women only get a few nights of sleep per month, with insomnia being associated with an up to three-times greater incidence of depression.

How to cope with menopausal and post-menopausal depression

While the symptoms of menopause cannot be completely mitigated, addressing symptoms right away is the best way to ensure a speedy resolution. The symptoms of depression should never be ignored, as if left untreated, they could get worse. The following are some recommendations that can help you identify depressive symptoms so you can rectify them right away or seek help if needed.

Additional tips for good sleep habits include taking an evening bath, having a nice cup of caffeine-free tea, or even having a light snack that is high in protein to keep you from suffering from hunger pangs during the night.

Menopause and joint pain: What is the connection?