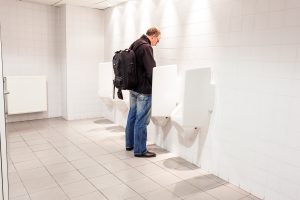 Bladder issues seem to be mainly a female problem, but there is a common bladder problem that affects both men and women – and it is rarely discussed. It is known as paruresis, but you may have heard it referred to as shy bladder or lazy bladder. Essentially, shy bladder is when you go to the bathroom with an urge to urinate, but as soon as someone else enters the bathroom you no longer can go.

The good news is, a shy bladder isn’t a condition that directly reflects a problem with the bladder or prostate, but it does reveal an underlying psychological fear. This fear could have been something that developed in childhood or as a result of sexual abuse, there are countless reasons, really.

It’s hard to determine how many people are affected by shy bladder as it rarely comes up in the discussion, but it is believed to affect both men and women.


How your psychology affects your ability to pee

When your bladder becomes full a signal is sent to the brain. The brain responds by making the bladder contract, relaxing the sphincter and allowing the outlet to open so you can urinate. In people with paruresis, these signals become repressed by the nervous system, which prevents the person to urinate as normal.

Although it is still not well understood as to why this happens, this is generally the mechanism at work.

Solutions and treatments for a shy bladder

If living with a shy bladder is negatively impacting your day-to-day living, you may want to open up to your doctor about your concerns. In some cases, a shy bladder could be associated with other conditions that require treatment, so having yourself checked out is probably a wise decision.

Another method is called time voiding, which involves creating a schedule to relieve yourself based on the times when you know you can be alone.

If your shy bladder is a result of a psychological condition or a younger life experience, it may be wise to undergo some cognitive behavioral therapy where the therapist will help you move through your past trauma and find coping mechanisms to overcome it.

Shy bladder can occur at any age, but you shouldn’t feel ashamed to discuss it. There are simple treatment options that don’t necessarily require medical intervention, so the first step is talking to your doctor about your concerns.

3 signs you may have a bladder problem