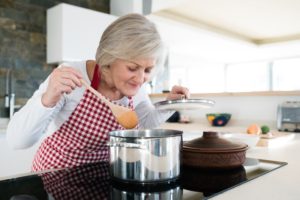 Do you know when digestion really begins? You may think it starts the moment food enters the stomach, but that’s incorrect. You may have heard it begins while chewing. Close, but still wrong. The digestive process actually begins the moment you smell and see food.

Once food is presented and you can see and smell it, your liver gets to work on the digestive process.

Recent research conducted on mice found that mice exposed to food had activated neurons that aid in digestion. The researchers suggest that this reaction could help provide greater understanding of how human bodies react to sensory perception of food along with providing insight into insulin resistance.

Neurons are triggered based on our hunger levels, and after prolonged periods of fasting, our brains produce agouti-related protein (AgRP) neurons that stimulate appetite and prompt us to eat. After we satisfy our hunger, proopiomelanocortin (POMC) neurons become activated, which then suppress hunger and make us feel full. Previously, it was believed that POMC neurons were only activated upon consuming calories.

In 2015, researchers exposed mice to the sight and smell of food, which kickstarted POMC activation and deterred AgRP. This essentially mimicked the effects of consuming a meal without actually eating it.

To determine how these signals triggered the liver, the researchers set out different food parameters and observed physiological responses in mice for 16 hours. They then divided the mice into three groups: a group that was fed, a group that smelled food but didn’t eat it, and a group that fasted.

After five minutes of just smelling the food, enough POMC neurons were generated, which activated mTOR and XBP1 production. These are pathways to the liver that help turn amino acids from food into folded proteins.

These reactions also occurred in the fed mice but not the fasted ones, which suggests that the sight and smell of food is enough to activate POMC and the liver.

Co-author of the study Jens Brüning explained, “There’s a possibility that this food sensory-dependent priming of the liver may be compromised in obesity. It could be a mechanism that contributes to insulin resistance. Obesity may leave the liver unprepared for protein folding after eating, which in turn could disrupt the normal insulin response. This is something we plan to look at in future studies using obesity models in mice.”

Follow-up research needs to be completed in humans to determine if the same effects occurs.