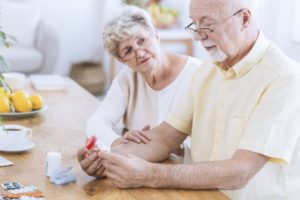 Older adults with type 2 diabetes, especially those taking diabetic medications, have a high short-term fracture risk, according to a new study. Research shows that not only are those who take medications at risk, but disease duration also contributes to risk factors.

The goal of the study presented at the American Association of Clinical Endocrinologists 28th Annual Congress was to show a connection between type 2 diabetes and short-term fracture risk, even though patients with type 2 diabetes tend to have normal or high bone mineral density.

The researchers from Harvard Medical School in Boston, Massachusetts looked at men and women participating in the Framingham Original and Offspring Cohorts. The Framingham Heart Study is a long-term, ongoing cardiovascular cohort study of residents of the city of Framingham, Massachusetts. The study started in 1948 with 5,209 adult subjects and is now on its third generation of participants.

The participants were analyzed for the diagnosis of type 2 diabetes, use of diabetes medications, and duration of type 2 diabetes. They compared these findings with incident fractures excluding fractures of the skull, toe, finger, and pathologic fractures. Adjustments were also made for age, sex, weight, and height.

The conclusions showed that older adults with type 2 diabetes who were taking diabetes medications, and those with longer disease duration, had increased one- and two-year fracture risks compared to adults without diabetes. The interesting point in the study came when they concluded that the risks evened out by 10 years.

Principal investigator Elizabeth J. Samelson, Ph.D., associate scientist at the Marcus Institute for Aging Research at Hebrew Senior Life and assistant professor at Harvard Medical School, told Endocrine Today, “Typically, you need to follow people forward for a long period of time to accrue enough fractures to do your study. But because of the incredible size and characterization of the Framingham cohorts, we were able to look at fracture risks over one year and two years as well as over 10 years. What we found was that having diabetes increased the short-term risk of fracture over one to two years … whereas over the 10 years — when you look out over the long term — the increased risk in diabetics was not significant.”

As the results showed imminent risk for fracture among older adults with type 2 diabetes, this provides an opportunity for better clinical intervention, according to the researchers. For those who are diagnosed with diabetes, this study outlines the importance of keeping bone mineral density strong. Many professionals advise lifestyle changes including a diet focused on osteoporosis prevention and weight-bearing exercises.