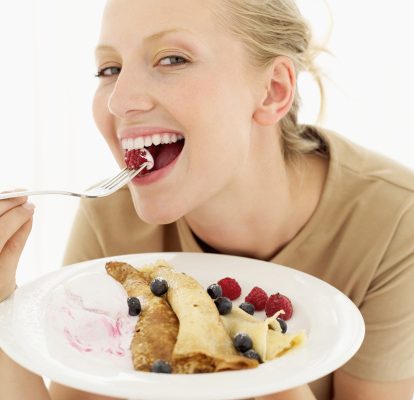 We have always been told, cut down on those desserts and you will start to lose unwanted pounds. Now a study has revealed that desserts could help you keep weight off.

For those who have a sweet tooth this is not a sign that you can run out to the nearest bakery and stock up on all your favourite cakes, cookies and other sweet treats. Good health still means you have to watch your dessert intake. What researchers discovered was that people who ate a high protein, high carbohydrate breakfast that included dessert, were less hungry throughout the day and were more able to keep off lost weight. Those who ate a low calorie breakfast were not as likely to keep off the weight that they worked so hard to lose.

Doctors say diets should not only focus on weight loss, but on hunger and craving reduction, and that is why the desserts seem to work at breakfast. If you are concerned about your risk of obesity this latest study is just another aspect of weight control to consider.

The breakfast research conducted by Tel Aviv University’s Wolfson Medical Center, monitored 200 non-diabetic obese adults. The participants were split into two groups; those who consumed dessert breakfast and those who ate a low carbohydrate breakfast. After four months people in both categories lost an average 30 to 33 pounds each. In the following four months it was a different picture. The low carb group gained about 22 pounds each while the breakfast dessert group lost an average of 15 pounds each. Throughout the rest of the day, the breakfast dessert group reported that they did not have hunger pains or crave food; they felt satisfied and were less likely to snack or seek big meals.

While food experts say the study does have some scientific merit, nutritional researchers at New York University are somewhat skeptical. They say they find that some desserts can actually trigger food cravings in people. They argue in certain cases if a person has one dessert, they want another one.

Nutritionists and dieticians say you still want to steer away from trans-fats like doughnuts, cakes, and cookies. Incorporate fruits and grains with a sweet flavor into your meals. This approach will go a long way in reducing your risk of obesity.

Previous medical research has shown that indulging in higher calorie meals is better in the morning than later in the day. The reason…earlier in the day the body’s metabolism is more active and able to work off the extra calories. Doctors say that breakfast is the meal that also regulates ghrelin. This is the hormone that increases hunger. Ghrelin rises before every meal, but is suppressed most at breakfast time. Scientists suggest that if you skip breakfast or have a low calorie breakfast, there will be an increase of ghrelin released from the stomach into the blood leading to cravings for high calorie foods throughout the day.

It is hard for many of us to imagine breakfast desserts being part of a good health plan, especially when we have been told for so many years to replace sweet treats with lots of fruits. However, many physicians who have had an opportunity to review the latest evidence say breakfast desserts do make sense; that there is a place for every kind of food as long as quantities are closely monitored.