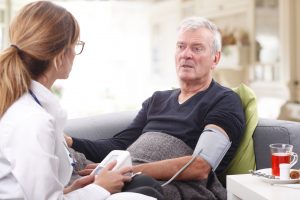 High blood pressure is a frequent topic of discussion as it is associated with an increased risk of a heart attack and stroke. But low blood pressure is often left out, even though this condition comes along with its own complications.

A new Dutch study has found that patients who experience dizzy spells as a result of low blood pressure have a 15 percent higher risk of developing Alzheimer’s disease or vascular dementia later on in life.

When a person becomes dizzy upon standing up, especially if they are of older age, this can indicate a very serious condition. This feeling of dizziness after standing up is related to a sudden drop in blood pressure, known as orthostatic hypotension. When this occurs, there is a greater risk of falls and injury.

The study included 6,200 people who were monitored for 25 years. Those who reported dizzy spells as a result of low blood pressure were found to have a 15 percent higher risk of developing Alzheimer’s disease or vascular dementia. Additionally, there was a higher risk of dementia seen in patients whose heart rates did not increase to compensate for the low blood pressure.

The researchers suggest that when less blood reaches the brain, cell damage can develop over time. Further research is required to better understand the link between low blood pressure and dementia in order to prevent this debilitating mental disorder.

Previous studies have pointed that high blood pressure contributes to an increased risk of dementia, too. The key then is to maintain healthy blood pressure numbers. The notion that “lower is better” isn’t actually the case here.

If you’re a senior suffering from orthostatic hypotension, you will want to have yourself checked out in order to improve your blood pressure numbers and thus reduce your risk of dementia.