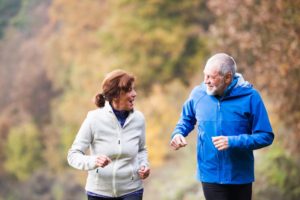 Higher levels of daily movement help improve thinking and memory skills in older adults. As there is a higher risk of memory and thinking problems occurring in older age, daily movements may offer a simple and viable solution to preserving such areas of health.

Lead author of the study Dr. Aron S. Buchman explained, “We measured levels of physical activity in study participants an average of two years prior to their deaths, and then examined their donated brain tissue after death, and found that a more active lifestyle may have a protective effect on the brain. People who moved more had better thinking and memory skills compared to those who were more sedentary and did not move much at all.”

The researchers found that the benefits on the brain through movement were still present even among participants who had signs of Alzheimer’s disease pathology in the brain.

The study looked at 454 older adults, of which 191 had dementia and 236 did not. All participants underwent physical examinations along with memory and thinking tests annually over the span of 20 years. Upon death, participants agreed to donate their brains. The average age of death was 91 years.

On average of two years prior to death, participants received an accelerometer that monitors movement. After about 11 days, data were collected, with an average of 160,000 counts per day.

Higher movement was associated with improved thinking and memory skills along with improved motor skills. There was a 31 percent reduction in dementia risk with every increase in physical activity.

After death, brains were analyzed to detect lesions and biomarkers of Alzheimer’s disease. Even after accounting for brain lesions, a link between activity and memory was still present. Regardless of whether a person had dementia or not, physical activity was still linked with improved thinking and memory skills.

Buchman concluded, “Exercise is an inexpensive way to improve health, and our study shows it may have a protective effect on the brain. But it is important to note that our study does not show cause and effect. It may also be possible that as people lose memory and thinking skills, they reduce their physical activity. More studies are needed to determine if moving more is truly beneficial to the brain.”