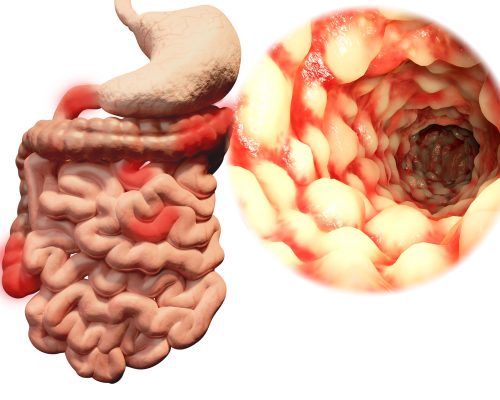 Crohn’s disease and ulcerative colitis progression and development have been found to be linked to “creeping fat.” Researcher Charalabos Pothoulakis said, “A well-appreciated feature of IBD [inflammatory bowel disease], especially longstanding Crohn’s disease, is intra-abdominal fat, also known as ‘creeping fat,’ which wraps around the intestine. However, it’s not clear whether this fat is protective or harmful. Our study offers insight into this phenomenon. We found that intra-abdominal fat cells may normally be programmed to dampen inflammation but, in fact, have acquired a tendency to promote inflammation in IBD.”

The researchers collected mesenteric fat tissues from 11 colitis patients, 11 Crohn’s patients, and 10 non-IBD controls. The researchers then isolated and cultured preadipocytes, cells that differentiate into becoming part pf adipose tissue where fat is stored for energy. They intended to evaluate the effect of the neuropeptide substance P on the expression of cytokines, which are small proteins important for cell signaling.

The researchers found that signaling mediators produced by the intra-abdominal fat cells in the controls were significantly different from those in the IBD patients. This indicates that these cells are actively involved in gut immunity and inflammation, as pointed out in the press release.

The researchers wrote, “Fat represents a novel reserve of IL-17 during the disease and may affect the progress of IBD by altering intestinal responses via interactions with IL-17RA. This observation along with the identification of IL-17 as the most consistently regulated mediator in human mesenteric preadipocytes isolated from IBD patients in response to [substance P] suggests a potential role for this neuropeptide in the regulation of inflammatory changes in the intestine during IBD (both ulcerative colitis and Crohn’s disease) via modulation of IL-17 expression in the adjacent mesenteric preadipocytes. Furthermore, our observations introduce the preadipocytes as a novel cellular population with immune properties that are likely involved in the regulation of intestinal inflammation during IBD.”


What is creeping fat?

Creeping fat is found in ulcerative colitis and Crohn’s disease patients, but it is still not well understood. More specifically, it has yet to be studied extensively, even though it has been known for decades.

Normal body fat is between 15 to 30 percent. In IBD sufferers, however, as much as 50 percent of the intestine is encased in creeping fat. Having more of this fat is associated with progression of Crohn’s disease.

How creeping fat affects IBD is not well understood. One theory suggests that it promotes inflammation, so future treatments can target creeping fat as a means of reducing inflammation. Because there are still many questions regarding creeping fat, it is hard to say what can be done to prevent it or treat it at this time. Additional research is required to better understand the mechanisms behind creeping fat so that the appropriate remedies can be recommended.