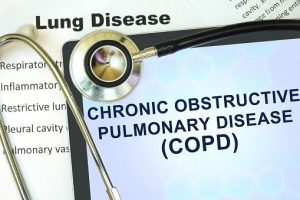 Trouble breathing? Persistent cough or frequent chest infections? This could be chronic obstructive pulmonary disease (COPD) – the name for a collection of lung conditions including chronic bronchitis, emphysema, and chronic obstructive airways disease. COPD exacerbation is not something you want to fool around with. Your body needs oxygen and you need to breathe!

People with COPD have difficulties breathing because of the narrowing of their airways – suitably called airflow obstruction. While you can’t reverse the damage, it is important that COPD is diagnosed as early as possible. The  treatment will make you more comfortable, for one, and will be directed to slowing down the deterioration of your lungs.

COPD patients might not be receiving adequate treatment: Recent study

A recent study has found that COPD patients may not be receiving adequate treatment. COPD is the third leading cause of death in the U.S.. Nevertheless, “[t]here are huge problems in access to and standards for care for some of society’s most vulnerable patients,” explained lead author Meilan Han.

Based on their study the researchers highlighted seven areas for improvement on COPD treatment:

COPD research and development: Cost-effective treatments must be developed, and additional funding is required for new advances in this area.

COPD-specific care: Records on COPD treatments are scarce, so data collection methods need to be addressed.

Assessment of cost effectiveness and quality: There is limited cost-effective analysis available on non-medication interventions. Quality measures for COPD need to be developed to promote evidence-based, high-quality care.

Future directions: Health systems need to be able to detect at-risk patients at every entry point into their system and embrace innovation. Patients and their caregivers should be engaged in their care plan. Truly integrated care for patients will allow for smooth and seamless transition through their treatment journey.

When it comes to understanding what COPD is, we need to take a look at the two most common conditions: Emphysema and chronic bronchitis. In emphysema,  the air sacs (alveoli) at the end of the smallest air passages (bronchioles) in the lungs are gradually destroyed. In chronic bronchitis, the lining of your bronchial tubes, which carry air to and from your lungs, becomes inflamed. Either way, bad news.

When the oxygen in the air you inhale enters your bloodstream, carbon dioxide – a gas that is a waste product of metabolism – is exhaled. Your lungs rely on the elasticity of the bronchial tubes and air sacs to force air out of your body. COPD, however, puts this process on the brakes. It causes the bronchial tubes and air sacs to lose their elasticity and partially collapse, leaving some air trapped in your lungs when you exhale.

The problem is, COPD symptoms often don’t show up until significant lung damage has already happened. Symptoms usually worsen over time. For chronic bronchitis, the main symptom is a persistent cough that you have at least three months a year for two consecutive years. You develop a chronic cough trying to clear your airways.

Other signs and symptoms of COPD

According to the Mayo Clinic, other signs and symptoms of COPD include:

To note, people with COPD may experience episodes called COPD exacerbation where their symptoms become worse and persist for days or longer.

A diagnosis of COPD often comes with an explanation of COPD stages. There are four stages with the last ominously referred to as the “end stage.” This is not a death sentence! People with stage 4 COPD can live for years, even with severely compromised lung capacity.

Stage 1: Mild COPD with only mild airflow limitation. In this stage, a patient might not even be aware that there is an abnormality in lung function.

Stage 2: Moderate COPD with progressing airflow limitation. This is most commonly the stage at which people seek medical help for chronic symptoms, often shortness of breath during exertion or even exacerbation of COPD.

Stage 3: Severe COPD with airflow limitation that is progressing even further and impacting the patient’s quality of life because of greater shortness of breath and reduced exercise capacity.

Stage 4: Very severe COPD with severe airflow limitation and life-threatening exacerbations. An impaired quality of life is also common with this stage.

What causes and puts you at risk of COPD?

Smoking is the main cause and risk factor for COPD. In the majority of cases, the lung damage that leads to COPD is caused by long-term cigarette smoking. But there are other factors at play, because only about 20 percent of smokers develop COPD.

However, the likelihood of developing COPD increases the more you smoke and the longer you’ve been smoking. Not surprising, smoking irritates and inflames the lungs. This leads to scarring and permanent changes in the lung. Symptoms of breathlessness, cough, and phlegm associated with COPD are sure to follow.

Smoking: Enemy to your lungs that causes scarring and permanent damage.

Fumes and dust: Air pollution or workplace fumes and dust. In the developing world, COPD occurs in women exposed to fumes from burning fuel for cooking and heating in poorly ventilated homes.

Asthma: This chronic airway disease means your lungs are already compromised. The combination of having asthma and smoking puts you at high risk for COPD.

Age: COPD develops slowly over the years. Most people are 35 to 40 when symptoms begin.

Genes: Genetic susceptibility to the disease or an uncommon genetic disorder known as alpha-1-antitrypsin deficiency.

Best way to protect yourself? If you’re a smoker, quit now! Protect your lungs from damage. Treatments for COPD involve medication to relieve symptoms, such as using an inhaler to make breathing easier. Pulmonary rehabilitation may also help to increase your activity level and the amount of exercise you are capable of doing.

If you have COPD, lifestyle changes can reduce the impact. Regular exercise and active lifestyle are recommended. Healthy eating, breathing techniques, and taking your medication as prescribed will also go a long way to reduce the symptoms of COPD.

Understanding COPD, what causes COPD, and the associated risk factors can help you take steps to protect your lungs from damage. See your doctor if you’re concerned. An early diagnosis and intervention can improve your quality of life – and help you breathe deep!

Emphysema and chronic bronchitis are two forms of chronic obstructive pulmonary disease (COPD). Both conditions are life-long and lead to permanent lung complications, which leads to difficulties with breathing. Continue reading…

A genetic link has been found between COPD and smoking behavior which can contribute to lung disease. Chronic obstructive pulmonary disease (COPD) is the third leading cause of death worldwide. As a progressive lung disease, breathing becomes more and more difficult over time. Continue reading…