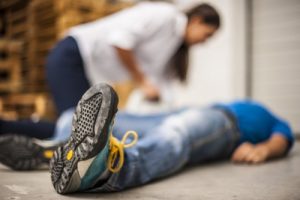 By definition, complex partial seizures only affect specific areas of the brain rather than the entire brain simultaneously. Like other types of seizures, they’re characterized by various electrical surges of energy that take place in different portions of the brain. This sensation can be caused by any number of mitigating factors, which will be discussed below. They typically impact a person’s awareness and can lead to temporary unconsciousness or impaired awareness.

What are the causes of complex partial seizures?

The following is a comprehensive list of causes and possible triggers of complex partial seizures:

Diagnosis of complex partial seizures even immediately after they occur is extremely difficult because there are so many different possible etiological factors that can contribute to strong surges of energy moving through the brain.

The main trigger or sign that someone is about to have a seizure is a change in aura. This can happen suddenly and includes the following:

Complex partial seizures typically only last about 30 seconds to a few minutes. If you or someone you know experiences a seizure that lasts longer than 10 minutes, it’s imperative that you get them to a safe and comfortable location and then immediately call 911 for assistance.

In most cases, the person who suffered the seizure will feel confused and extremely fatigued for about 15 minutes after it’s over and they most likely will have no memory of the episode. They might not even be able to retain their short-term memories prior to the seizure.

What are the symptoms of complex partial seizures?

The following is a list of complex partial seizure symptoms:

This is a disturbance that occurs in a person’s perception of their surroundings, emotions, and senses. It usually occurs right before a seizure is about to begin and it can induce immense feelings of fear, anxiety, and even depression in the person suffering the seizure. Emotions and senses may feel heightened unexpectedly and inexplicably. Some people can experience physical sensibilities such as bizarre tastes in their mouths even if they haven’t eaten anything, hear sounds that are inaudible to others, and even smell odors or scents that don’t exist.

Complex partial seizures can adversely affect a person’s ability to understand what’s presently happening around them throughout the duration of the episode. They may be awake, but that doesn’t mean they’re fully conscious or aware of their surroundings. That’s why it’s essential to assist someone suffering from a complex partial seizure to get to safety and try to place them in a position where they can lie down as they lose awareness and control of their faculties. In some cases, they might be experiencing what’s known as a focal impaired awareness arrest seizure, in which case the person will be rendered totally immobile.

These are repetitive and uncontrollable movements or actions. They can be verbal cues such as crying, laughing, moaning, repeating the same phrase or words, or screaming incessantly for seemingly no reason whatsoever. Usually, the person has no awareness of their actions. These cues can also be oral such as chewing (even if they’re nothing in their mouth), smacking their lips, or swallowing (again, even if there’s nothing to swallow). Physical manual cues may also be present, and these can include: removing articles of clothing, picking at things (especially removing imaginary lint from their clothes), and moving their legs and arms as if they’re riding a bike or swimming.

Like the episodes themselves, these symptoms typically only last about 30 seconds to a few minutes and should subside on their own.

Before beginning any type of testing to try to diagnose the etiology of your seizure, your doctor will attempt to collect as much accurate information as possible to help them form a detailed medical history of the event. Since people who suffer seizures typically have no memory of what happened, they’ll want to consult people who were with you during the seizure to ensure that all information is accurate.

Lab studies are often administered with the hopes of ruling out a number of potential causes and triggers of complex partial seizures as well as to check your electrolyte levels and help stabilize them if they’re too low or too high. People who suffer from a complex partial seizure, whether it’s for the first time or not, typically undergo an electroencephalogram (EEG), computed tomography (CT) scan, or magnetic resonance imaging (MRI).

During an EEG, your doctor will attach sensors to your frontal lobes. These sensors are connected to a special computer that measures and records your brain waves with the intent of studying your cranial patterns and trying to determine the cause and location of your seizure

CT scans involve taking numerous x-rays from different parts of your head so that your doctor can examine each one separately and try to determine where the seizure occurred in your brain and how various brain activities may have influenced or affected it.

MRIs involve the use of special magnets that capture images of your brain from all angles and sends radio waves that can accurately depict each part of your brain.

These are used to prevent future seizures or at the very least reduce the frequency and force with which they occur. Only about 30 percent of patients don’t respond at all to AEDs.

Diets that consist of low-carbohydrate and high-fat intake, such as the ketogenic diet, can help to control the frequency with which seizures occur and keep them at bay. Always consult your doctor before making any permanent changes to your diet to ensure it’s safe for you to do so.

A device that’s attached to the vagus nerve in the neck is implanted in the chest cavity. Similar to RNS, this device sends pulses of energy to the brain in order to prevent seizures from happening and decrease their frequency over time.

How to help someone suffering from a complex partial seizure

Since you have no way of determining what type of seizure someone is suffering from without a full medical analysis, the best thing to do is to make sure you can get them to a safe location where they can lie down either on a piece of furniture or on the ground. Place something soft like a towel or pillow under their head and continue communicating with them in a soft and calm manner.

Even if they can’t physically respond to what you’re saying, they might still be able to hear you. Remove all potentially harmful objects from within their reach and try to remove them from any potentially harmful situations (i.e. driving, swimming, exercising, etc.). Try to track the length of their seizure. If it lasts more than about 10 minutes, then you need to contact emergency authorities immediately.

If you ever witness someone having a seizure in a public place, the best thing you can do is to stay with them throughout the whole ordeal, even if they’re a stranger. Your input during their subsequent medical examination will be invaluable to determining the cause and type of seizure the person may have suffered. It’s important that you try to remember as many details as possible and report them as accurately as possible to the person’s physician afterward. The most important thing to remember is that you shouldn’t panic and try to remain as calm as humanly possible in this situation.