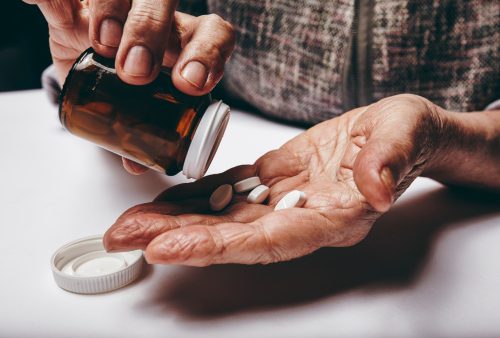 A commonly prescribed medication for the treatment of overactive bladder, and one that is taken by millions of Americans, has been linked to an increased risk of dementia, researchers say. More than one-quarter of patients with urinary problems are prescribed oxybutynin (Ditropan), according to the international team of investigators.

Previous studies on the prescribed medication have linked it to thinking problems and increased risk of dementia in older patients, possibly due to the way it affects brain chemicals.

“It’s a great and effective drug for younger patients, but is a risky drug for older patients,” Pucheril said. It boosts dementia risk even when not taken indefinitely.

It may be an issue of cost, as the alternatives to oxybutynin are generally more expensive and may not be covered by insurance, at least not initially.

“Most Medicare Part D plans have a tiered drug formulary, which means that patients must try and ‘fail’ oxybutynin before they will be eligible for the newer generation of [so-called] antimuscarinic medications,” Pucheril said.

It is estimated that about 33 million Americans has an overactive bladder, according to the Urology Care Foundation. Some of these patients need to urinate urgently, frequently, or both, with some also suffering from incontinence. While non-medical treatment options are usually the first line of therapy, such as implementing scheduled urination and changes in diet, sometimes prescription medication such as oxybutynin or even surgery is required.

To determine how often oxybutynin is prescribed to seniors, researchers examined 2006–2012 statistics from the U.S. National Ambulatory Medical Care Survey. The researchers focused on about 2,600 patients aged 65 and older who received prescriptions for oxybutynin or similar medication for overactive bladder. They found that the drug was prescribed 27 percent of the time to this particular group of patients, with only 9 percent of those who took the drug having had a neurological exam, despite the U.S. Food and Drug Administration recommending to monitor these patients for any signs of brain problems.
“We cannot tell if patients are being monitored for neurologic problems in other ways,” Pucheril noted. In addition, some doctors—but certainly not all—may be unaware of the mental side effects of oxybutynin.

While an alternative to oxybutynin exists, opinions by medical experts are divided on if they are actually safer. A 2011 paper in Current Urology Reports described darifenacin (Enablex), tolterodine (Detrol), trospium (Sanctura), and solifenacin (Vesicare) as “having little or no risk” of oxybutynin-like effects on the brain.

“The problem here is whether it would eliminate the risk to switch everyone to another antimuscarinic,” said Staskin, an associate professor of urology at Tufts University School of Medicine in Boston.

Other options do exist for the treatment of overactive bladder that may be useful in the elderly population. According to Pucheril, a newer class of medication called beta-3 agonist, neuromodulation (zapping nerves with electricity), and Botox delivered into the bladder may be viable alternatives.

A Canadian specialist noted that immediate-release oxybutynin is the form most linked to dementia. “Older patients on the drug should consider a review with their clinician,” said Dr. Adrian Wagg, director of geriatric medicine at the University of Alberta. There’s no evidence that a family history of dementia adds to the drug’s risk, he said, or that people who already have dementia will face the same added risk as others.

Urinary tract infections and dementia in elderly: Symptoms and treatment