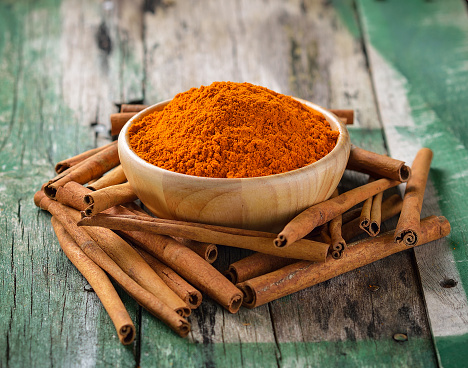 Can you be indifferent to cinnamon?

Not really. Either you’re really not into it and don’t understand what the fuss is about. Or, you’re a cinnamon aficionado.

Your nose can probably detect freshly baked cinnamon buns from miles away. At a coffee shop, you always top off your latte or cappuccino with a pinch of ground cinnamon. You bake apples with cinnamon sticks, and your mulled wine in the winter is flavorful and spicy (courtesy of the humble spice yet again).

If you like cinnamon, you would agree that it’s very good on its own. But fortunately, the spice boasts plenty of health benefits too.

Obtained from the inner bark of a cinnamon tree, the spice has been in the spotlight for a long time. Ancient nations valued it as a gift for rulers and gods (an inscription on the wall of the temple of Apollo at Miletus mentions the gift of cinnamon). For centuries, spice traders of the Mediterranean world kept their sources a secret out of fear for competition.

A common kitchen staple, the spice is widely used in traditional medicine. And now, modern medicine is researching cinnamon’s beneficial properties, particularly in the matters of diabetes and blood sugar management.

A mounting body of evidence speaks in favor of cinnamon’s ability to prevent blood sugar spikes and protect against insulin resistance. A 2015 study demonstrated that patients with type 2 diabetes experienced greater reductions in their blood glucose levels through cinnamon supplementation compared to their counterparts on a placebo. The benefits of supplementation remained even after the end of the study, pointing to the possibility of changes at a cellular level. Research lead Amy Stockert suspects that the spice may have activated a protein involved in gene expression.

The protein in question is sirtuin 1, which actively participates in insulin regulation. It works with another protein involved in glucose transportation. Stockert’s research uncovered that cinnamon contains a certain compound similar to those that activate sirtuin-1.

Taking this into consideration, you can see that cinnamon’s effects go beyond simply blood sugar control. Sirtuin-1affects fat metabolism, cell growth, and even gene expression, all important factors to the diabetes pathogenesis.
Another study, also conducted by Stockert, showed that participants who had even one gram of spice a day experienced reductions in their sugar levels comparable to those expected from prescription drugs.

While the research is still inconclusive and further studies are required to make more definitive conclusions, active use of the spice in cooking can do lots of good for your health.

“if cinnamon interacts with this enzyme [Sirtuin-1] in the way our model suggests, it could possibly be linked to antiaging, antioxidant control, a lot of really important health benefits… and it shouldn’t take one gram a day to see those effects,” added the researcher.

Impressive, isn’t it? It’s another reason to add some cinnamon to oatmeal, toast, butternut squash, and even chili.

Why is kale a superfood?

Seniors: 4 superfoods you should be eating