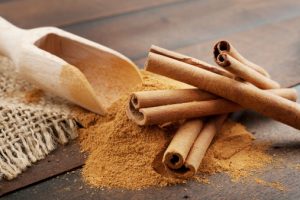 Polycystic ovary syndrome (PCOS) increases the risk of heart disease and type 2 diabetes, but cinnamon may help in treatment. Polycystic ovary syndrome is a common hormone disorder that affects women during their reproductive age. Compared to women without the syndrome, women with PCOS have been found to be at greater risk for heart disease, type 2 diabetes, reproductive disorders, and cancer of the uterine lining.

Women with PCOS have higher levels of male hormones and this imbalance in hormones can cause changes in menstrual cycles, infertility, weight gain, acne, excess hair on the face and body, and thinning of the hair on the scalp. Nearly five million women across America have PCOS.

Study author Roger Hart said, “PCOS has profound implications for a women’s reproductive health as well as her long-term risk of chronic illness. Our study indicates women who have PCOS have twice as many hospital admissions as women without the condition. Additional healthcare resources should be directed to address the risks facing this population.”

The study examined health records from 2,566 women over the age of 15 with PCOS. Patient’s records were compared with 25,660 similarly aged women without PCOS. Women diagnosed with PCOS were found to be hospitalized for reasons unrelated to reproductive health or injury, compared to women without PCOS. Hospitalizations for women with PCOS included depression, stress, and anxiety, and were associated with higher rates of diabetes, high blood pressure, heart disease, asthma, and musculoskeletal disorders.

Heart concluded, “We found women who have PCOS are particularly prone to developing metabolic and cardiovascular disease. Since only 25 percent of the women we studied were older than 40, we anticipate the rate of diagnosis would rise as these women continue to age.”


PCOS treatment by adding cinnamon to the diet

An alternative study found that adding cinnamon to a patient’s diet may improve the treatment for PCOS. The use of cinnamon in one’s diet can help improve insulin resistance outcomes. The researchers enrolled 45 women with PCOS in the six-month trial. The women who received cinnamon had more regular menstrual cycles, compared to women taking a placebo. Furthermore, two women in the group reported spontaneous pregnancies.

Steven T. Nakajima, president of the Society for Reproductive Endocrinology and Infertility, said, “Though small, this rather elegant study shows that cinnamon may be an effective and inexpensive treatment for PCOS patients.”