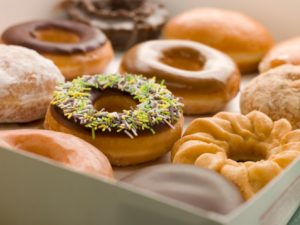 There has been a big push against sugar, as numerous studies have linked a high intake of sugar to weight gain, diabetes, and other health problems. The latest findings suggest that sugar intake can also take a toll on your mood. The study found that although high-sugary foods like cake may make you happy in the moment, over time, sugar intake can cause your mood to take a nose dive.

The World Health Organization recommends that people reduce their intake of sugar to below five percent of their total energy intake. Unfortunately, Americans consume triple the amount of recommended sugar and it comes from a variety of sources.

About one in six people worldwide live with a common mental disorder like anxiety or depression.

Although there have been numerous studies that have uncovered a link between sugar and depression, it hasn’t been clear why or how the link exists. Unfortunately, this link isn’t well understood, but there are some theories. For starters, changes may occur as a result of the sweet taste and the sugar itself. This was suggested as a result of a study conducted on rats. Rats that were fed a high fat and high sugar diet had lower levels of a protein known as BDNF, which influences growth and development of nerve cells in the brain. BDNF is believed to play a role in depression and anxiety.


Another possible link is inflammation, and it is known that a high sugar diet is linked to greater inflammation.

There is already some preliminary research that links inflammation to mood disorders.

For the most recent study, the researchers used sugar intake from sweet foods and beverages to predict new and recurring mood disorders among a group of British civil servants. The researchers further investigated whether or not already having a mood disorder would make a person more inclined to opt for sugary foods.

Although the study is just another link between sugar intake and mood disorders, there are still many questions that need to be answered. In the meantime, it’s a good idea to keep your sugar intake to a minimum.

Related: Foods for your mood