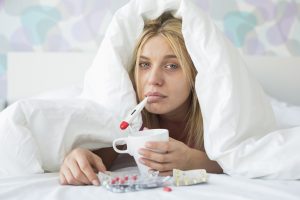 Cold and flu season generally peaks during the colder months like January and February. The busy holiday times along with added stress wear down our immune systems, leaving us defenseless against illness.

Although at first the cold and flu may appear the same, the key differences in symptom severity and duration can help distinguish between either illness.

Here we will outline those key differences to help you better distinguish between the common cold and flu, while also offering treatment methods for both.

The National Institute of Allergy and Infectious Diseases has compiled an easy go-to chart to help you better understand the symptoms experienced in a cold or flu.

The flu vs. cold season in U.S.

Cold season is more closely related to changes in humidity, so you may also see spikes in-between season changes. Beginning of the school year is also associated with a spike in the incidences of common cold as children are exposed to different germs of other children.

Signs and symptoms of common cold vs. flu 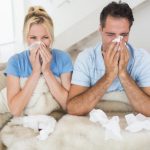 
Flu vs. cold: Transmission and causes

Influenza is transmitted from person to person and can travel up to six feet. The flu travels through droplets when a person coughs, sneezes, or talks. The transmission takes place when these droplets enter the mouths or noses of another person. The flu may also be transmitted through touching a contaminated object and then touching your nose or mouth. There are three main strains of influenza – A, B, and C – and the annual vaccine combines different varieties of circulating strains in order to offer optimal protection.

The flu is highly contagious, and a person can infect others even being unaware of having flu themselves. The flu is most contagious between one day prior to symptom onset and up to seven days of becoming sick.

The common cold is also passed from person to person when the virus enters a person’s nose or mouth. There are over 200 viruses that can trigger the common cold, with rhinovirus being the most common.

Difference between cold and flu: Risk factors and complications

Risk factors for the flu include being under the age of five or over 65, being pregnant, being obese, residing in nursing homes, having asthma, neurological and neurodevelopment disorders, chronic lung disease, heart disease, blood disorders, endocrine disorders, kidney disorders, liver disorders, metabolic disorders, and having a weakened immune system.

Risk factors for the common cold include exposure to someone who is sick, young age, weakened or suppressed immune system, and the fall and winter season.

If the flu is left untreated, it can result in complications and can even be life-threatening to certain age groups including seniors. Complications related to the flu are bronchitis, pneumonia, aggravation of other conditions, sinus infection, and ear infections.

Complications of the common cold are less severe than complications related to influenza. Complications that can arise from a cold include middle ear infection, sinus infection, asthma attacks in asthma patients, strep throat, pneumonia, bronchitis, bronchiolitis, and croup cough. 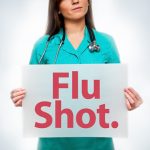 Both the common cold and flu cannot be treated with antibiotics as they are not caused by bacteria. Treating a cold or flu with antibiotics can raise the risk of antibiotic resistance. The best way to treat a cold is allowing your body to rest, so you should avoid attending work, school, or other events that can wear yourself out further.

Over-the-counter medications like decongestants, antihistamines, and pain relievers can help aid in symptom relief. Colds generally improve within a few days, but if your cold is sticking around for over a week or is accompanied by a fever you should see the doctor.

The flu may be treated with antiviral medications prescribed by your doctor, but these generally work to lessen the duration of the flu and reduce symptoms – they are not a cure for the flu. Antivirals may cause unwanted side effects, so speak to your doctor about whether this type of medicine is right for you.

Basic treatment for the flu is resting and staying hydrated. Once again, pain medications may be taken to ease symptoms.

Preventative measures for the common cold and flu are quite similar. It’s important to frequently wash your hands, especially during flu and cold season. Avoid individuals who are sick, and stay home if you are sick to prevent transmission onto others. Reduce stress, as well as eat well and exercise regularly, in order to keep your immune system strong. Unlike the flu, the common cold does not have a vaccination, so you will need to take the necessary steps to ensure you reduce your risk of catching a cold. To prevent the flu, the annual flu vaccine is your first line of defense.

A new study has added more evidence to the old claim that good night’s sleep helps ward off colds and infections. The researchers found that individuals who slept for less than five hours had a 28 percent higher risk of catching a cold, compared to those who received regular sleep (seven to eight hours). Continue reading…

Influenza (flu) vs. pneumonia, differences in symptoms, causes, and treatments

Influenza (flu) and pneumonia at first glance may appear the same, but there are distinct differences between the two along with different treatment methods that need to be considered in order to get over either illness. Continue reading…