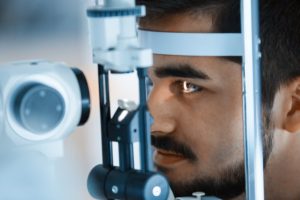 With the recent legalization of marijuana in some states and across Canada, the use of the plant for medicinal purposes has been a favorite topic. With any new trend, however, the downsides will eventually appear, and new research has just brought to light an adverse effect of cannabidiol (CBD), the non-psychotic chemical in marijuana.

Medical marijuana has become increasingly popular to treat glaucoma, but this new study has found that the CBD chemical in the plant can actually increase the level of pressure inside the eye, which is the exact thing the drug is meant to be treating.

The study was conducted in mice, with the hope of moving onto human trials in the near future. The researchers used different groups of mice with glaucoma and treated them with THC, CBD, or some combination of both chemicals. They assessed the intraocular pressure of the mouse at hourly intervals after treatment to assess the benefits of the different ingredients in marijuana.

The findings of the study reflected past research in confirming that THC (tetrahydrocannabinol), the main psychoactive chemical in marijuana, effectively lowered the pressure in the eye. Within four hours of being exposed to THC, the male mice in the study showed a significant 22 percent decrease in intraocular pressure. This lowered even further after eight hours of exposure to a total of 30 percent decrease in pressure. They found the benefits of the THC to be lesser in the female subjects, which showed only a 17 percent drop in pressure after four hours and no added benefits after eight hours of exposure.

CBD Increases Pressure Inside the Eye

When they treated the mice with a combination of THC and CBD, however, the beneficial effects were reversed. These mice actually showed an 18 percent increase in their intraocular pressure, which persisted for at least four hours after the mice had been exposed to the CBD.

The researchers believe that the sex differences are an important finding of the study, on top of the adverse effects of the CBD. Further research will be needed to test CBD’s impact on glaucoma in terms of it increasing the pressure in the eye, which is the main risk factor for the condition and can lead to permanent blindness.

“This study raises important questions about the relationship between the primary ingredients in cannabis and their effect on the eye,” said Alex Straiker, lead study researcher. “It also suggests the need to understand more about the potential undesirable side effects of CBD, especially due to its use in children.”

By comparing the effects of THC and CBD on mice without glaucoma, the researchers correctly identified the CB1 and GPR18 neuroreceptors as those responsible for lowering intraocular pressure in response to treatment with THC.

“There were studies over 45 years ago that found evidence that THC lowers pressure inside the eye, but no one’s ever identified the specific neuroreceptors involved in the process until this study,” said Straiker. “These results could have important implications for future research on the use of cannabis as a therapy for intraocular pressure.”