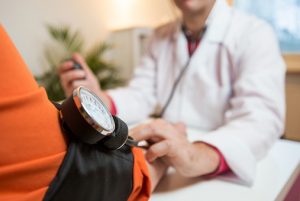 Blood pressure is the force of blood against vessel walls and is typically measured in millimeters of mercury. Values are given in two numbers: one for systolic blood pressure – top number, and the other for diastolic – bottom number. Both numbers represent the force during a heartbeat and the force during rest, respectively.

Typically, a normal blood pressure reading is considered to be 120/80, but an individual’s normal range may vary. The systolic blood pressure is commonly seen to rise as we get older, with diastolic showing a slight decline.

Related: What is systolic and diastolic blood pressure?

Several psychological and physical factors can impact systolic blood pressure in an individual. However, it is important to keep in mind that blood pressure is not a static measurement, as the values for both systolic and diastolic ranges change constantly throughout the day. This is because your circulatory system is a dynamic structure that has to adjust to various stressors. As a result, your doctor will never make a diagnosis of hypertension from a single visit, but rather take blood pressure readings across multiple visits before making a definite diagnosis.

Factors affecting our mental state, such as being frightened or anxious, can also affect systolic blood pressure. This is an autonomic response by the body to help deal with immediate stressors. These situations typically result in increased heart rate and blood pressure, as your body is preparing to go into action.

Additionally, external factors such as the things we eat and the habits we indulge in can also affect systolic blood pressure. For example, smoking, drinking excessive amounts of alcohol and coffee, and the use of illicit drugs can all immediately affect blood pressure. Long-term exposure to certain lifestyle choices can even affect blood pressure more significantly. Additionally, commonly used prescriptions or over-the-counter medications, such as non-steroidal anti-inflammatory drugs or antidepressants have also been linked to hypertension.

Not all dynamic increases in systolic blood pressure have a negative connotation. When you exercise, the heart has to pump harder to ensure blood is supplied to the whole body during these times, but it does so in regard to supporting the body, making it stronger. By exercising, you can lose weight, strengthen cardiovascular health, and relieve stress, all factors that help maintain proper blood pressure levels.

Additional examples of secondary hypertension include endocrine disorder such as thyroid disease, Cushing’s syndrome, and pheochromocytoma. The endocrine system is responsible for several metabolic processes that can affect blood pressure if disrupted.

For the most part, older individuals are more likely than the young to develop systolic hypertension, as it is believed that the heart naturally has to work header. It is currently estimated that more than 30 percent of women over 65 and more than 20 percent of men have systolic hypertension. Those with a family history of high blood pressure are thought to be more likely to have it as well as they get older. More than any other race, African Americans are more likely to have higher blood pressure compared to the general population.

Having high blood pressure is generally considered to be a silent disease. There are very few initial symptoms. However, as the body loses its ability to handle the load put on it, symptoms may begin to arise. High systolic blood pressure symptoms may include:

High systolic blood pressure treatment will generally be tailored for the specific patient, which will take into account unique co-morbidities and other factors that may have caused increased blood pressure such as ischemic heart disease, heart failure, atrial fibrillation, renal insufficiency, and diabetes.

Most treatment regimens will rely on anti-hypertensive medication, which typically includes:

How to treat systolic hypertension naturally

According to new guidelines, the goal is to have blood pressure that is below 130/90. You should make it a point to have your blood pressure checked at least once a year.

Normally, having high blood pressure doesn’t present with symptoms, however, some people may have shortness of breath, chest discomfort, heart palpitations, headaches, or vision changes. If you experience any of these symptoms, speak to your doctor right away.

Increase the number of fruits and vegetables

This is a great way to get more natural food into your diet. DASH diet recommends four to five serving of fruit and four to five serving of vegetables, with a serving size being half a cup. Fruits and vegetables are great sources of potassium and magnesium, making them great sources for blood pressure control. You can start by making smaller changes to your diet plan such as choosing to eat fruit instead of an unhealthy snack.

Essential oils for high blood pressure and how to use them

How to lower blood pressure quickly and naturally