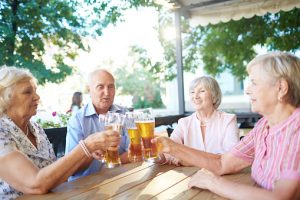 Attention ladies: Finally, a beer company has you in mind. The Portsmouth Brewery in New Hampshire has developed a craft beer to help you combat those nasty menopausal symptoms. Common symptoms of menopause include insomnia, hot flashes, and headaches. Women experience these symptoms as a result of changing hormones which take place during menopause. The beer is called Libeeration and the company worked alongside health practitioners and herbalists to target an often overlooked demographic.

Libeeration contains ingredients like stinging nettle, lemon balm, motherwort, mugwort, rose, chickweed, damiana, and chamomile. The product has taken years to develop and finally bring to the market, but its producers suggest it can help ease symptoms like sleeping problems and mood swings.

Brewery co-owner Joanne Francis explained, “We want to shift the mentality from focusing on the negative aspects of this stage in life, to celebrating the liberating aspects!”

Women drinking craft beer is on the rise and Francis first thought of the idea of a menopausal beer six years ago. Menopause is a part of life, but many women are frustrated with the nagging symptoms that negatively impacts daily life.


On Portsmouth website its explains the beer saying, “LIBEERATION was designed specifically for women experiencing menopausal symptoms and to celebrate the liberating aspects of this stage of life.” Francis added, “It’s taken years to bring this idea to market. After consulting with women health practitioners and herbalists, our team came up with ingredients believed to relieve symptoms like sleeplessness, hot flashes, and mood swings.”

Other natural remedies recommended to ease menopause symptoms include eating a healthy diet and exercising regularly. But adding a craft beer to your routine is far more enjoyable, don’t you think?

How long does menopause last?
Menopause and migraines: Natural remedies for menopause migraines