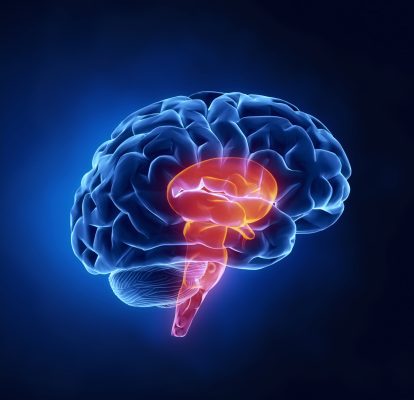 A stroke is the result of an interruption in the blood flow to the brain, depriving it of oxygen and essential nutrients. A brain stem stroke is a stroke that occurs in the brain stem, near the base of the skull and just above the spinal cord. The brain stem is responsible for many crucial functions of the nervous system including breathing, heartbeat, blood pressure, speech, swallowing, digestion, hearing, and eye movements.

Due to its importance in all these functions, brain damage caused by a brain stem stroke is much more severe than a stroke in other parts of the brain. Proper functioning of the brain stem is critical to our survival.

The cause of a brain stem stroke is the same as the cause of any other stroke: loss of blood supply to the brain. This can occur for a number of reasons, including a blood clot that travels through the bloodstream and gets lodged in a blood vessel in the brain (ischemic stroke) or accumulation of blood in the brain after the rupturing of a blood vessel causing increased pressure inside the skull (hemorrhagic stroke).

There are many risk factors for strokes. Some of these are:

Males and individuals of African descent are also at a higher risk for stroke.

Mild complications of brain stem stroke include impaired breathing and loss of consciousness. More serious complications include coma or locked-in syndrome, but both of these are rare. Locked-in syndrome occurs when the entire body of a patient becomes paralyzed, excluding the eye muscles. Patients remain conscious during locked-in syndrome and can only communicate through eye movements. Other complications, occurring in only 1 percent of stroke patients, include psychosis, delusions, and hallucinations.

As the brain stem is responsible for swallowing functions, these can also be confused during a brain stem stroke. The patient may need to swallow but be unable to, or swallow involuntarily without needing to. In severe cases, this can lead to choking or suffocating, as the windpipe gets closed off during the swallowing action.

Patients may also suffer from dizziness or vertigo, causing difficulties walking or standing from a seated position. Eye movements can become irregularly slow, restricted from full movement, and both eyes may move without regard for the other. Speech impediment can also be a symptom of brain stroke, with the patient slurring their speech or being unable to speak properly, although the patient remains aware of what it is they want to say. This is due to misdirected signals to the muscles in the face and mouth caused by the stroke. Other symptoms include loss of hearing, difficulty chewing, weakness in one side of the body, extreme lethargy, blurred vision, and difficulty understanding the speech of others.


How to Diagnose and Treat a Brain Stem Stroke

Any type of stroke is considered a medical emergency and should be treated immediately. If you feel a sudden onset of the symptoms mentioned above, contact emergency medical services or have someone do it for you.

Diagnosis of brain stem stroke begins by identifying your symptoms and when they began. A doctor will also look for any evidence that there has been an injury to the head or neck. Once the possibility of a brain stem stroke has been established, the doctor will likely order blood tests as well as an imaging scan of some sort, usually a CT scan or MRI, to see the blood pathways and if there are any blockages.

If the underlying cause of the stroke is determined to be a blood clot, the patient will often be started on clot-dissolving medicines right away. If the cause is found to be a hemorrhage in the brain, blood pressure medications will be administered to lower the blood pressure of the patient or clotting medicines will be administered to help close up the vessel that ruptured. The aim of all treatments is to restore proper blood flow to the brain as soon as possible to avoid severe damage. In some cases, surgery will be required to stop the bleeding from a hemorrhagic stroke. A ventilator may be used to help the patient’s breathing.

Continued therapies are usually required for full treatment of the damage done by a stroke. These include physical therapy, speech therapy, and other rehabilitation treatments as needed.

Lack of oxygen to the brain, as the result of a stroke, can cause serious long-term damage to patients’ normal functions. Because the impaired function will differ from patient to patient, there is no general prognosis for the recovery or life expectancy of someone who has suffered a brain stem stroke.

The sooner a patient gets the proper diagnosis and treatment, the better their prognosis is. Survival rates are higher for patients who suffer from an ischemic stroke rather than a hemorrhagic one. In patients who suffer from locked-in syndrome, life expectancy is ten years or more after the stroke. For most patients, additional therapies and medications will be required to extend life expectancy for the remainder of the patient’s life after initial treatment of the stroke.

A brain stem stroke is a stroke that occurs in the brain stem. This can be due to a blood clot or a ruptured blood vessel disrupting the usual flow of blood to the brain. As the brain stem is responsible for critical functions, the damage it can cause can be much more severe than a stroke in another area of the brain. Major signs of a brain stem stroke include irregular breathing and heartbeat, as well as impaired motor functions including sight, hearing, speech, and swallowing, all resulting in additional symptoms.

A stroke of any kind is considered a medical emergency and needs to be treated immediately. Diagnosis of a brain stem stroke often requires imaging scans and blood tests. Treatment of the blood flow issue will usually involve blood clotting or clot dissolving medicines. In some cases, surgery is required. Life expectancy and prognosis for brain stem stroke patients is highly dependent on the type and severity of the stroke, but is overall optimistic if proper diagnosis and treatment are received quickly.