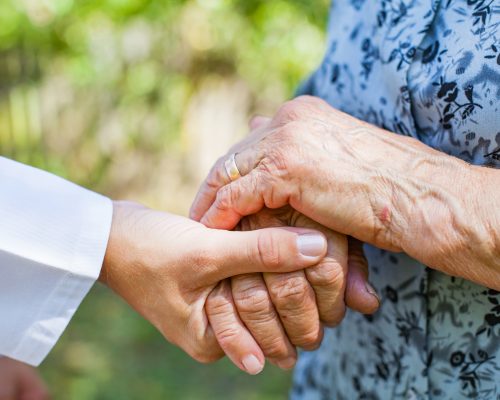 Asterixis is a disorder where a person loses motor-control of various body parts, causing the muscles in the region to relax abruptly. As a result, a rough bilateral action is often noticed in the affected region, which is usually the wrists and fingers. Patients of asterixis cannot hold the affected body part steady. It begins to ‘flap’ after some time and is therefore sometimes called a ‘flapping tremor.’ Asterixis is also called ‘liver flap’ as it could be an indication of liver disease.

Asterixis is a form of negative myoclonus, which occurs when agonist muscles temporarily lose their muscle tone, resulting in a visible involuntary jerk. This means that it is a sudden and brief jerk that occurs when a muscle or a group of muscles relax abruptly.

The ‘flapping tremor’ cannot be predicted and is irregular in nature. While in most cases, it is observed in the hands, it can affect other body parts as well. The involuntary flapping of eyelids, quivering of the corner of the mouth or tongue, and movement in the ankles and feet are also signs of an asterixis tremor.

Asterixis can be associated with a number of conditions ranging from diseased organs and metabolic encephalopathies to lesions in the brain. Based on this, doctors have identified two types of asterixis—unilateral and bilateral.

Unilateral asterixis develops in people who have lesions in different parts of the brain. These include the genu—the knee-like bend in the corpus callosum—and the ventrolateral thalamus—the internal capsule of the brain. In addition, lesions may also be observed in the midbrain, medial cortex, and parietal cortex.

Bilateral asterixis is mainly caused by metabolic encephalopathies. This means that an imbalance in electrolytes and chemicals in the body damages the brain, resulting in asterixis. These abnormalities could include hypoglycemia, hypokalemia, and hypomagnesemia.

Bilateral asterixis is also associated with liver failure. This type of asterixis is called a ‘liver flap’ or ‘hepatic flap.’

There is no single or main cause for asterixis. However, it is largely caused due to the following:

What are the symptoms and risk factors of asterixis?

The main symptom of asterixis is a bilateral ‘tremor’ in the hands or wrists (and at times, the feet). The tremor resembles the flapping movement of wings.

When such tremors occur in the hand muscle, the muscle contractions occur at a frequency of three to five hertz.

The tremor could manifest as an arrhythmic or irregular jerky movement that occurs when the person has stretched their arms outwards and dorsiflexed the wrists. In simpler words, the person would not be able to hold a fixed position.

In addition, this could lead to weak arm muscles and discomfort, including pain in the arms. The jerky movement could also cause pain in the joints. The individual cannot control this tremor. It may also occur in other regions controlled by the musculoskeletal system such as the mouth, tongue, or foot.

In addition to tremors, a patient with asterixis may exhibit other symptoms depending on the cause of asterixis. For example, if the main cause is metabolic encephalopathy, the patient may display symptoms of metabolic disorders.
These could include tachycardia, abnormal abdominal cramps, and diarrhea.

Similarly, if the patient is suffering from respiratory insufficiency, they would have difficulty breathing and may exhibit shallow breathing and use of accessory muscles. In addition, the skin may appear discolored and have a bluish tone indicative of insufficient oxygen in the body. This condition is called cyanosis.

If the brain is affected, there are not only minor behavioral changes but also sleepiness and lack of focus.

How to diagnose asterixis?

The main tests for asterixis are tests of motor actions of the patient.

Doctors identify asterixis by telling the patient to extend the arms and dorsiflex the wrists and spread all fingers. The patient is asked to hold this position. If there is irregular involuntary flapping that starts, stops for 50 to 200 milliseconds, and then recurs, it is usually diagnosed as asterixis.

If the symptom is in the foot region, the patient is asked to lie down and lift the affected leg or legs off the bed. The patient is then told to dorsiflex the foot. The doctor observes the ankle and feet for movement.

If the patient is experiencing a problem in the hip region, they are made to lie down and bend the knees, keeping the feet flat, allowing the legs to fall to the sides. If there is a movement in the knees in this position, it shows that the hip joint is experiencing tremors.

Doctors may also ask the patient to close the eyes and mouth tight and watch for movements such as irregular twitching of eyelids.

Finally, the person is asked to stick out the tongue and the doctor checks if it starts to quiver.

In addition to the obvious ‘tremor’ symptoms, doctors also check for symptoms of the underlying cause. Doctors may check for metabolic decline, problems breathing, and symptoms of lung, kidney, and liver disease.

If the patient has renal disease, the doctor may inquire about the therapy received or the frequency of dialysis.

If the patient suffers from hyperkalemia, the doctor information on the intensity and frequency of nausea, tachycardia, diarrhea and abdominal cramps can reveal the extent to which this may have affected the patient.


How to treat asterixis?

Asterixis is not just a muscular movement. It is usually connected with a chronic or acute problem which manifests as tremors. It is that cause that doctors prefer to treat.

If the doctors have identified certain drugs that triggered the condition, they will advise you discontinue those drugs or modify the dosage after consulting the physician that prescribed them. These include anti-epileptic drugs.

However, if it is related to a more serious underlying condition such as liver, lung, or kidney disease, the asterixis treatment is based on the extent to which the affected organ is damaged. This includes the brain and the nerves as these are affected as well.

If a person is suffering from Wilson’s disease, controlling copper levels can help to reduce the tremors.
Similarly, if the patient has been suffering from hepatic encephalopathy or azotemia, the doctor may prescribe a medication and diet that would lower the levels of ammonia in the blood. The prescribed medication would inhibit the production and absorption of ammonia in the intestine. These include disaccharides like lactulose that are not absorbed, and antibiotics such as neomycin and metronidazole.

Doctors usually refrain from prescribing antimyoclonic drugs as these have been known to aggravate the symptoms rather than address asterixis.

When to see a doctor for asterixis

If you have been experiencing tremors or flapping movements, it is time to seek medical attention instead of speculating at home and trying to find solutions for the problem. It is extremely important to get a physical check-up done by a doctor who knows your medical history, particularly if you experience involuntary tremors that repeat at intervals.

If you experience ‘flapping’ of hands and you cannot control it, you must seek medical attention as soon as possible.
Sometimes, tremors and flapping are symptoms of more serious underlying issues. It is best to ask your doctor for a complete medical diagnosis to identify the root cause behind this.

If you experience an involuntary jerk-like movement in your hands, legs, or even the facial region, it could be asterixis. Asterixis could be caused by several factors ranging from the side effects of medication to metabolic issues and dysfunctional internal organs. Therefore, it should not be taken lightly.

Since asterixis is usually triggered by a more complicated medical condition, it is best to see a doctor and get a diagnosis before the condition progresses. The doctor will physically examine you, recommend investigations, and suggest a plan of action that is best suited for your condition.