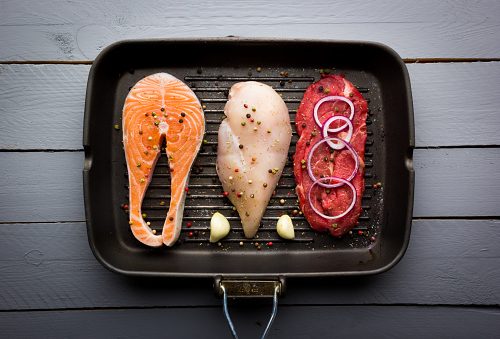 Alzheimer’s disease that sets in later in life could be prevented by consuming a high protein diet of nuts, meat, and fish.

The Link between Protein and Alzheimer’s Disease

Alzheimer’s disease that is characterized by impaired cognitive functioning and memory decline results from the deposit of amyloid-β (protein plaques) in the brain. While this protein is naturally present in the body, when it forms plaques around nerve cells, it can disrupt their functioning. In many cases of Alzheimer’s disease, high amounts of plaque deposits could result in an autoimmune reaction wherein the body would start to discard these non-functioning brain cells. Therefore, it has already been established that amyloid-β deposits are detrimental to the brain.

Researchers claim that there is an inverse relationship between these amyloid-β deposits and protein intake. Hence, consuming more protein can help to stop amyloid-β from depositing in the brain, thereby preventing Alzheimer’s disease.

The findings are based on a study of diets of 541 older people who had no memory decline. Researchers divided the volunteers into three groups based on their dietary protein intake (highest, average, and lowest), tested the blood samples of the volunteers in each group for biomarkers, and measured the amyloid-β levels in their brains.


This study confirmed a relationship between protein consumption and amyloid-β levels. According to Binosha Fernando, a lead researcher at Edith Cowan University of Australia, the study shows that more protein intake lowers the deposits of amyloid-β in the brain, reducing the risk of Alzheimer’s disease. However, it is not clear why this happens.

A previous study published in the American Journal of Hypertension demonstrated that high intake of both animal and plant protein can help regulate blood pressure levels. A protein-rich diet significantly lowers the risk of developing high blood pressure, and protein intake could prevent high blood pressure in the long-term as well.

Protein in the diet is vital for liver function: Study

Migraine diet: Foods to eat and avoid for migraine attacks