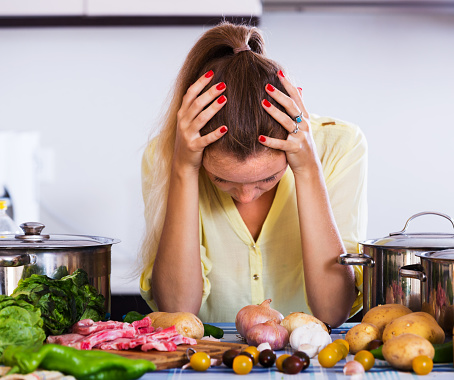 Migraine attacks can be very difficult to deal with, often leading sufferers to experience severe throbbing headaches as well as nausea, vomiting, and a sensitively to light and sound. However, what most people don’t realize is that the food they eat can significantly influence the onset of these kinds of headaches.

Migraine diets are something many medical professionals will endorse when diagnosing a patient as a chronic migraine sufferer, as many studies have found links between migraines and food.

In this article, we will discuss some of the most common foods that are part of a typical migraine diet plan, as they help prevent and even treat migraine attacks. Additionally, we will go over several foods to avoid, as some food may trigger migraines.

Foods to eat for a migraine

Already part of a healthy diet, dark leafy greens can reduce the incidence of a wide range of health condition, including migraines. These leafy greens include spinach, arugula, beet green, and kale, just to name a few. The vegetables contain beneficial vitamins that not only support our bodies but can also help reduce the incidence of migraine frequency, intensity, and duration. Riboflavin (B2) is one vitamin found in dark leafy greens that can be abundantly found in spinach.

Eating a handful of your favorite mixed nuts could be just what you need to get over that debilitating headache, as the magnesium they contain may help get rid of them. A previously done study found that migraine frequency was reduced by more than 41 percent when participants took magnesium supplements, a common element found in many nuts such as almonds, sesame seeds, and cashews.

All-natural, grass-fed beef and beef liver are known for containing high amounts of CoQ10 and B12. Both are naturally occurring compounds in the body that are known for preventing migraines, according to the American Academy of Neurology and the Canadian Headache Society. However, it is recommended to stay away from aged, dried, fermented, pickled, salted, or smoked meats, as they actually trigger migraines.

A nutritious part of any diet, eggs can also play a role in overall migraine prevention. They are known for containing abundant amounts of B vitamins, of which riboflavin (B2) has been found to effective in reducing headache frequency, intensity, and duration when given in doses of 200 or 400mg per day. Consuming two large eggs can provide you with 24 percent of your daily recommended value of riboflavin.

Hypoglycemia (low blood sugar) is a common migraine trigger, and one of the simplest ways to prevent it is to consume whole grains. The food type is metabolized by the body at a much slower rate, allowing you to maintain your blood sugar levels more consistently. Common sources of whole grains include buckwheat, barley, bulgur, whole oats, and quinoa.

This includes salmon, herring, halibut, mackerel, sardines, and tuna, all of which are great sources of omega-3 fatty acids. A study of chronic headache sufferers found that an increase in omega-3s, alongside a decrease in omega-6s, led to few headaches per month and a significant decrease in psychological distress. Overall improvement in patient well-being was also appreciated.

Vitamins and minerals make eating fruits a great part of any diet, but this also extends to preventing migraine headaches as well. The high levels of water they contain also help improve your overall hydration, helping to prevent the common migraine trigger of dehydration. Examples of some fruits include berries, cucumber, melon, tomatoes, grapefruit, cantaloupe, apricots, papaya, peaches, and cherries. Pineapples may be especially beneficially as they have been found to contain an enzyme with anti-inflammatory properties, possibly helping reduce headache symptoms.

Common items include marjoram, which can help relieve headaches when consumed as a tea. Ginger root is known for having anti-inflammatory properties, as well as cinnamon and rosemary, which both can help lessen or prevent headaches.

A compound found in coffee, tea, and chocolate, consuming too much caffeine as well as caffeine withdrawal can lead to the development of migraines. However, according to the American Migraine Foundation, the right amount of caffeine can actually help stop migraines as well, but only with the occasional use of the substance.

A commonly used ingredient in low-calorie foods, as it is seen as a sugar alternative. While a great alternative for diabetes sufferers, artificial sweeteners can, unfortunately, lead to migraines. Aspartame, in particular, is believed to be the most common type attributed to triggering migraines, according to the Mayo Clinic.

A common beverage type across the globe, alcoholic drinks are believed to be a common migraine trigger. Red wine is especially linked to their development. While it is still up for debate what this is, it is believed that a combination of excessive dehydration along with several compounds they contain (e.g. tannins and flavonoids) are the culprits leading to migraine development.

An estimated 22 percent of people who consume chocolate suffer from migraines, according to the American Migraine Foundation. This is thought to be the cause of beta-phenylethylamine and caffeine that they contain. However, the precise reasoning behind why some individuals develop headaches due to this tasty treat is still up for debate.

A common additive to many food products, but it also exists naturally in the body as well. While safe to eat, MSG has been linked to migraines. MSG may trigger severe migraines in 10 to 15 percent of people who experience migraines, according to the American Migraine Foundation.

These meats often contain preservatives called nitrates, helping to preserve color and flavor. This compound is known for releasing nitric oxide into the bloodstream, which is thought to dilate blood vessels in the brain.

Products such as feta, blue cheese, and parmesan contain a substance called tyramine that forms as protein in cheeses start to break down. Migraines have been linked to excessive tyramine consumption.

Kimchi, kombucha, and all other pickled goods are known for containing high amounts of tyramine, which leads to migraine formation.

This includes the likes of ice cream and slushies, which can be so cold that they can trigger headaches if eaten too quickly.

A common substance used for preserving foods, but unfortunately, it can lead to increases in blood pressure and cause headaches or migraines.

While not completely understood, a link between migraine and citrus fruits have been reported by several studies.

Tyramine is a common compound found in aged and fermented foods. Those on an anti-depressant class of medication known as MAO inhibitors are actually advised to avoid all foods containing the substance, as doing so can lead to severe headaches, increase heart rate, nausea, vomiting, and high blood pressure.

The following are some common food groups and their level of tyramine:

Maintaining a specialized diet for any reason can be difficult, but it can be the most effective thing you can do. Making careful choices about what foods you choose to eat can make all the difference in preventing migraine headache, or at the very least, help to reduce their severity. If your headaches have become unmanageable, seeing your doctor as soon as possible is highly recommended.

How to get rid of a migraine hangover (postdrome) headache

Hypertension headache: How to identify if high blood pressure is the cause