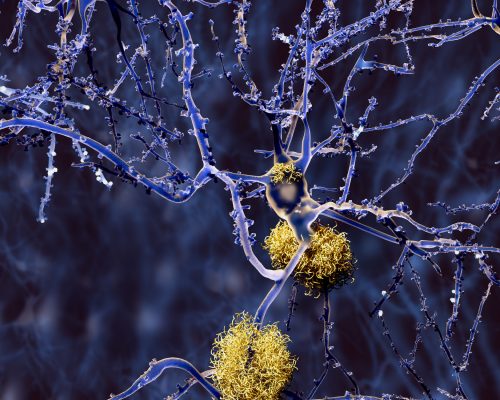 Alzheimer’s disease and type 2 diabetes share the amyloidosis link. Amyloidosis is the accumulation of amyloids, which are proteins that fold incorrectly. When proteins that are normally soluble in water are not folded correctly, they become insoluble and deposit in organs and tissues, disrupting the normal function.

The researchers from Uppsala University in Sweden found brain amyloid can motivate the growth of fibrils (fine fiber) in the murine pancreas.

Researcher Gunilla T. Westermark, said in a news release, “Several soluble proteins are amyloid forming in humans. Independent of protein origin, the fibrils produced are morphologically similar. There is a potential for structures with amyloid-seeding ability to induce both homologous and heterologous fibril growth. Heterologous seeding between IAPP and beta-amyloid may represent a molecular link between [Alzheimer’s disease] and [type 2 diabetes].”

Studies have shown that type 2 diabetes patients have double the risk of developing Alzheimer’s disease, and the findings from the Swedish study reveal amyloidosis may be the link between the two conditions.

“It is not clear if IAPP found in brain is locally produced or derived from pancreatic beta-cells. Cross-seeding by other amyloid aggregates or perhaps by other types of aggregates offers one possible mechanism for initiation of amyloid formation. Interactions between amyloid and other aggregation-prone proteins may be of great importance in the development of protein-misfolding diseases,” concluded Dr. Westermark.

It may be therapeutically useful to target the accumulation of amyloid protein plaques and tangles as a means of preventing Alzheimer’s disease or slowing down its progression. To create such treatment methods, more research must be done to uncover how these plaques and tangles are formed.